What You Need to Know About Kitten Development 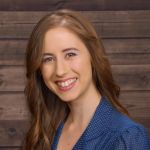 Written
by Kristina Tyler
View all 7 articles Learn about our editorial process and veterinary review board.

Is there anything cuter than a kitten?  Although adorable, they grow up fast.

If you will be caring for a litter of kittens, you need to know exactly what to expect during each stage of development.  Read this article to learn more about the different phases of a kitten’s growth. 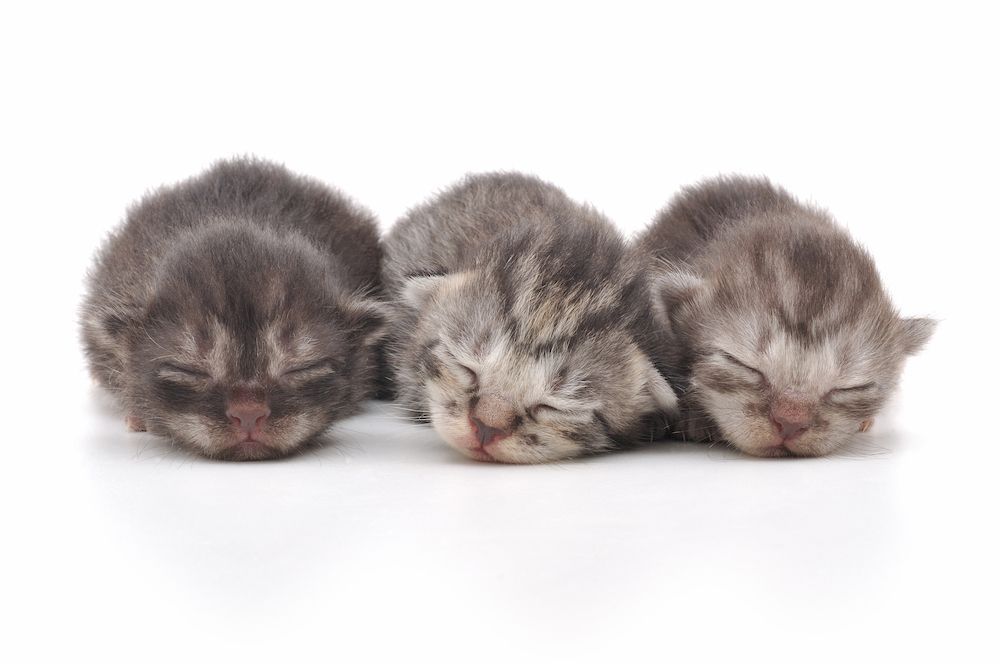 Kittens are born with their eyes closed, ears folded over, and no teeth.  Because they can’t see or hear, they rely on their sense of smell.

During their first few weeks of life, kittens are helpless. They are unable to walk, regulate their own body temperature, and retract their claws.  But they can crawl around and mew when hungry.

Newborns kittens can’t do much except sleep and nurse.  It’s imperative for kittens to stay with their mother so that they can consume their mother’s milk and receive the proper care. It is especially important that they drink the first milk, which is a golden colour and is called colostrum. This milk is rich antibodies and highly nutritious. Not even the best milk replacer can equal colostrum so it is vital that we try and get kittens drinking from mum.

Sadly, some kittens are orphaned or the mother is unable to care for them.  In those cases, human caregivers need to bottle feed each kitten every two hours with specific kitten replacement milk.

Caregivers must also stimulate kittens to go potty by rubbing warm cotton wool on their genitals after a feed and help them maintain their ideal body temperature with blankets and heat lamps.

Between the ages of one and two weeks, a kitten’s eyes and ears slowly begin to open. Their eyes should be fully opened by the time they are two weeks old, but they still cannot see very well. Although a kitten’s eye color is likely to change later on, most kittens are born with blue eyes.

Once kittens are three weeks old, their ears point upward and look like a smaller version of an adult cat’s ears. They can see and hear much better by this age.

Although still unable to walk, one-week-old kittens start lifting their heads and moving their limbs.  When they turn two weeks old, kittens start trying to walk.  Their first attempts will be unsteady and awkward, but it won’t take long for them to get the hang of it.

Kittens don’t start showing teeth until they are three weeks old.  The first signs of teeth show up towards the front of the mouth, where the incisors reside.  At this age, kittens also start retracting their claws and making purring noises.

When kittens are four weeks old, they become more interested in their surroundings and are more capable of investigating the world. They have gained a better sense of balance which enables them to walk more easily.

Kittens start going to the bathroom on their own when they are about four weeks old.  They learn how to use the litter box by following their mother’s example.

At this stage of development, kittens still aren’t able to run.  However, their sense of sight and hearing have improved even more and their canine teeth begin to appear.  Furthermore, they usually begin learning how to groom themselves at this age.

It’s still vital for kittens to remain with their mothers during this phase of their development.  If human caregiving is necessary for whatever reason, the litter will require frequent feedings as seen below:

Caregivers must also do the following: 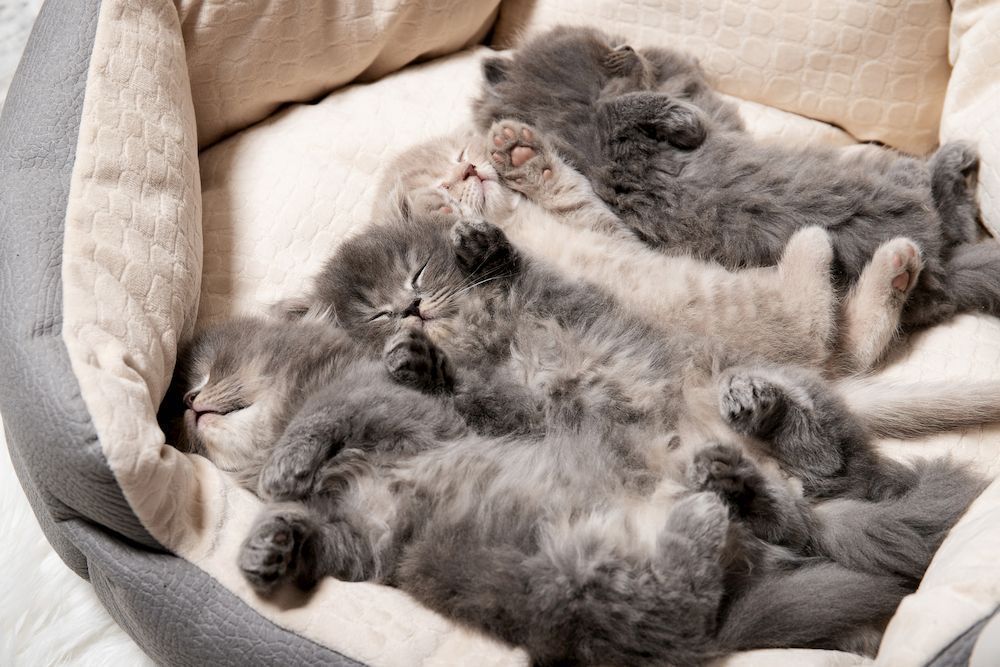 When kittens are about five or six weeks old, they start to run around and play with their littermates.  They might even start jumping on and off furniture and other objects.

Their energy levels and playfulness only increase from six to eight weeks of age.  During this phase, kittens sleep less and play more. By the time they are eight weeks old, kittens will have highly developed coordination skills.

Kittens typically have a pretty good handle on using the litter box by the time they are about five weeks old.  They will also show signs of improved grooming and social skills.

By six weeks of age, kittens should have fully developed sight and hearing. They don’t have all baby teeth yet, but their premolars are probably coming in about this time.

When kittens are seven weeks old their eyes begin to change color.  Once they reach eight weeks of age, they will have their permanent eye color.

At this stage, there is a very good chance that kittens will start getting into mischief. That’s why caregivers need to enclose the kitties in a pen or a kitten proofed room. This will keep the kittens safe and out of trouble.

Caregivers should start weaning kittens when they are four to five weeks old. Although they still need their mother’s milk or bottle feedings, kittens are can eat wet kitten food at this age.

The weaning process should continue through the next several weeks.  By the time they are seven weeks old kittens can consume dry food. When they are eight weeks old, kittens should be eating kitten food 3-4 times per day.

By the time they are 9 weeks old, most kittens are fully weaned off their mother’s milk.  At this point, their diet should consist of wet and/or dry kitten food.

See the list below to find out how often to feed kittens:

Kittens grow very quickly during the first eight weeks of their lives, but that doesn’t mean they are ready to leave the litter quite yet.  Ideally, kittens will stay with their mother and littermates until they are 10 weeks old.

Kittens still have so much to learn from their mothers and littermates, and taking them away too soon can deprive them of learning those valuable skills.

Let’s look a little more closely at the various reasons why it’s best for kittens to stay with their mothers until they are old enough to be adopted:

As you can see, waiting until kittens are 10 weeks old to give them away will enable them to grow into confident, healthy, and secure adult cats. 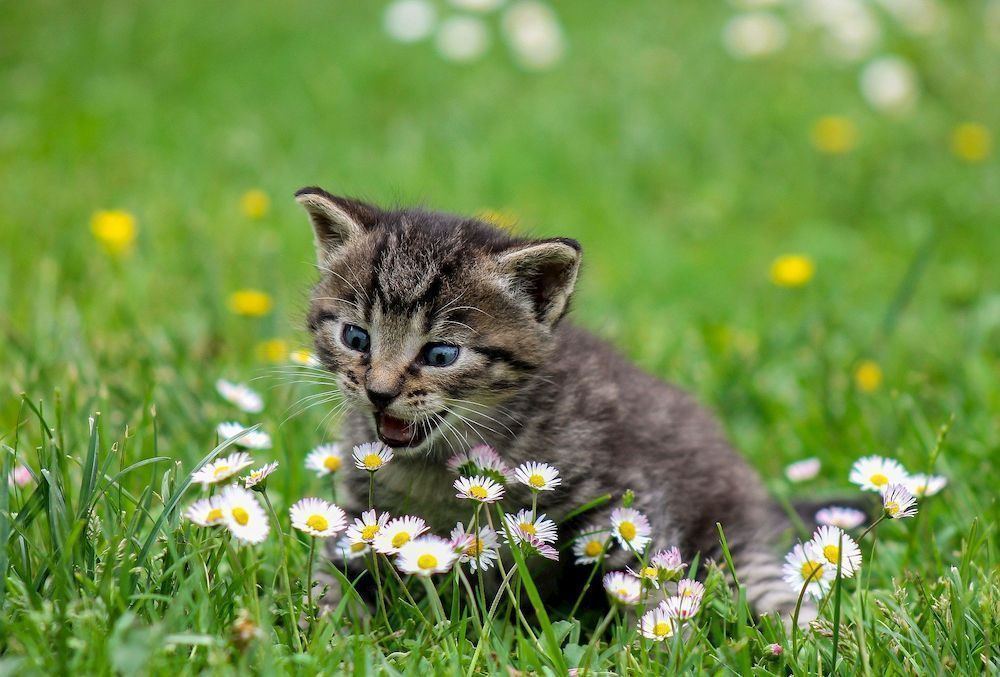 How to Tell a Kitten’s Age

Want to find out how old a kitten is?  If you don’t know the exact date of birth, there are other ways to determine a kitten’s age.  Let’s discuss what those are right now.

Take a Good Look at the Kitten

Examine the kitten’s teeth and eyes. The list below describes what they should look like during the different stages of development:

In general, the number of pounds on the scale will match a kitten’s age in months.  For example, if a kitten is three pounds, he or she is probably three months old.

A kitten’s increase in weight will stick to this pattern up to the age of five months.  After that, this method becomes unreliable.  It’s also worth mentioning that kittens who have not been thriving or perhaps have a parasite burden will be lighter than expected for their age.

How Coordinated is the Kitten?

Kittens gradually develop their coordination skills.  The list below explains just how well developed those skills are at each stage of growth:

Now that you’ve read this article, you have a much better idea of what to expect during each phase of a kitten’s development.  This will come in handy if you are ever caring for a litter of kittens.

And remember, it’s essential to let the kittens stay with their mother for as long as they need.  This will give them the best chance of thriving as adult cats. 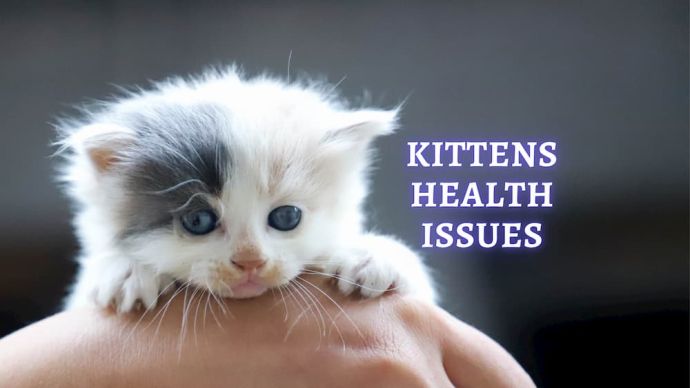 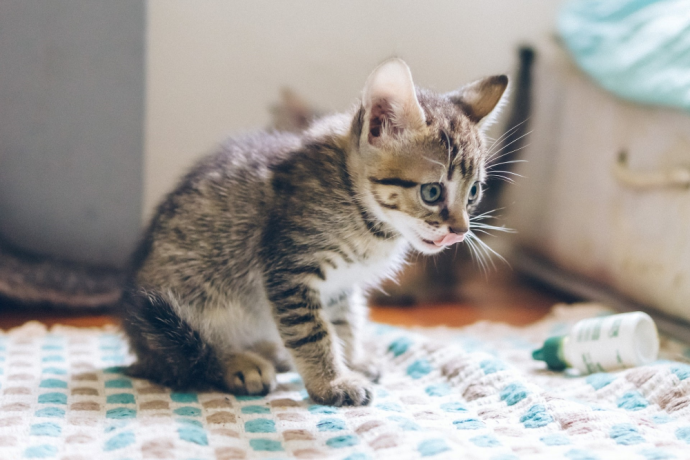 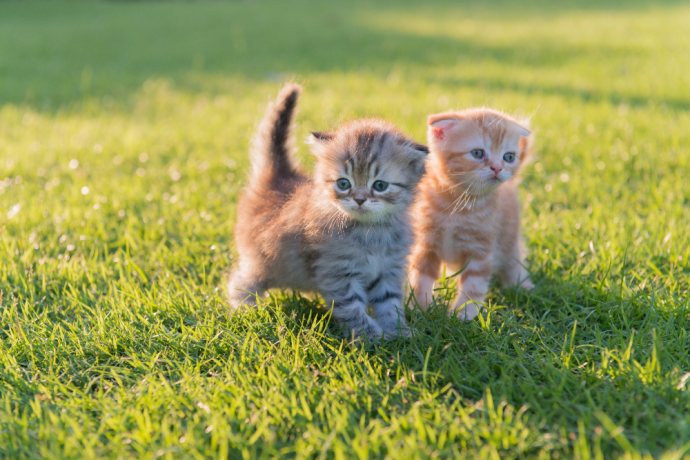 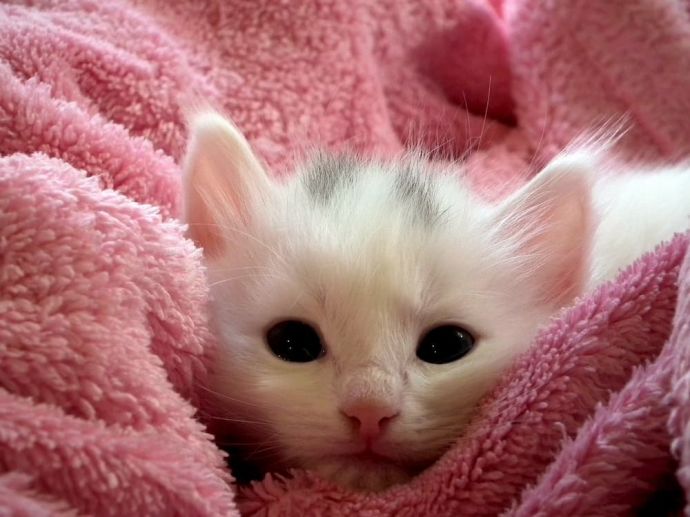 When To Wean Kittens 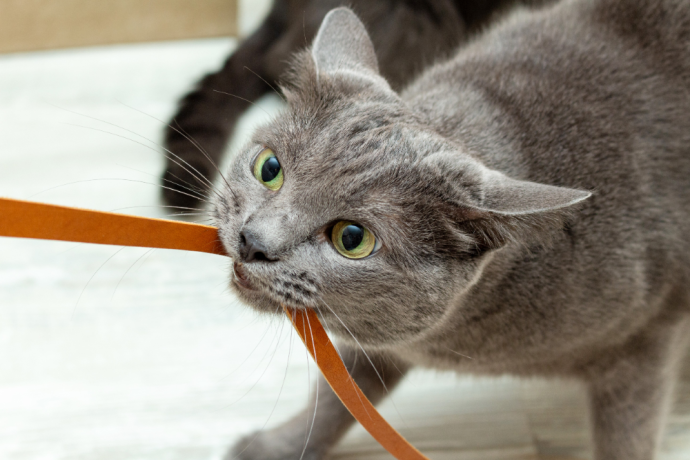 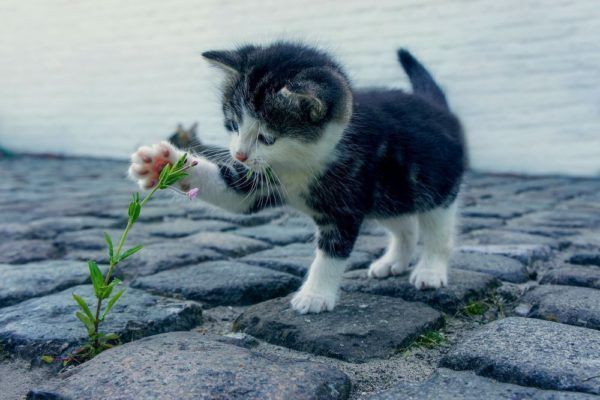 How to Keep Your Kitten Entertained 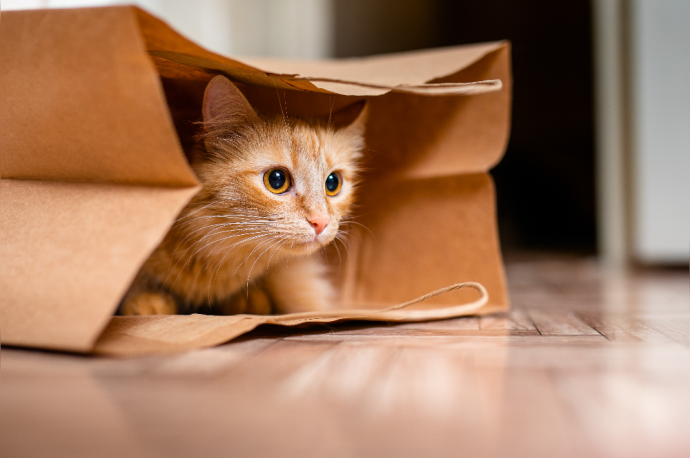 Things to Know When Raising a Kitten 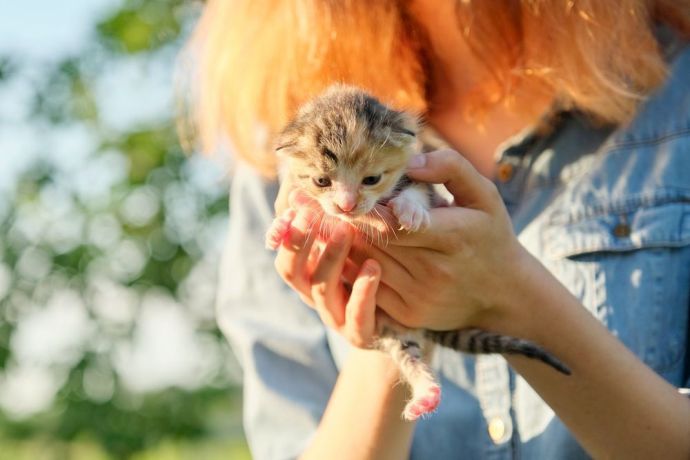 How Often to Feed Kittens