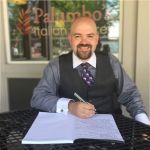 Written
by Casey Fenn
View all 10 articles Learn about our editorial process and veterinary review board.

There are a lot of advantages that are associated with keeping shrimps in the aquarium. Asides from the fact that the shrimps would feel more at ease in such an environment, it also improves its ability to live well and feel more comfortable. Many people seem to think that shrimps should be kept in a fish tank instead of an aquarium. This shows that there a lot of misconceptions about how shrimps should be maintained. While some species of Shrimps can survive in a fish tank, it is always advisable to keep them in their natural habitat, aquarium. 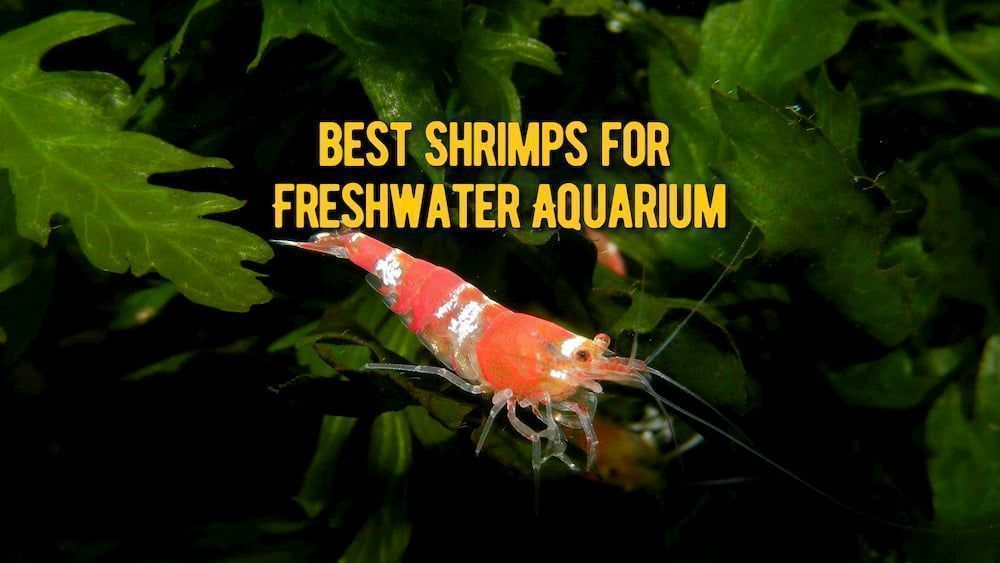 Image by @basuka from Pixabay

An aquarium is a suitable place for shrimps to live in. They are the right habitat for them and provide them the opportunity to feed on algae and other insects that appeal to them.

In this article, the 12 best shrimps for the freshwater aquarium will be extensively discussed, and insightful information will be given! 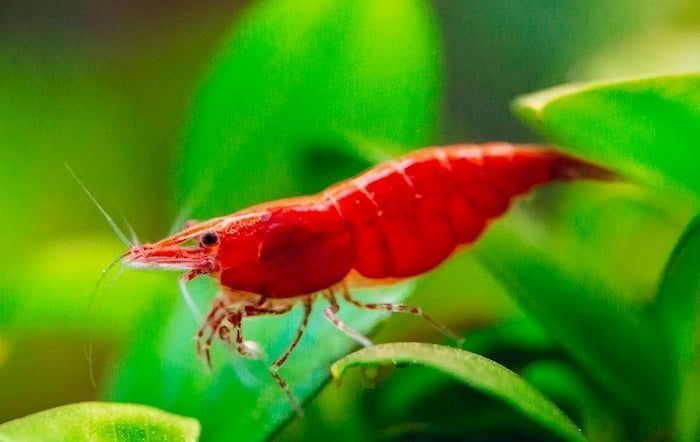 This type of shrimp is necessary to control the growth of algae. They feed on algae and also consume leftover foods. While this shrimp seems very peaceful, it should not be kept alongside bigger fishes so as to prevent a situation where they will be devoured. The best way to preserve the life of Cherry Shrimp is to house them with small fishes. Interestingly, it is easily taken care of. 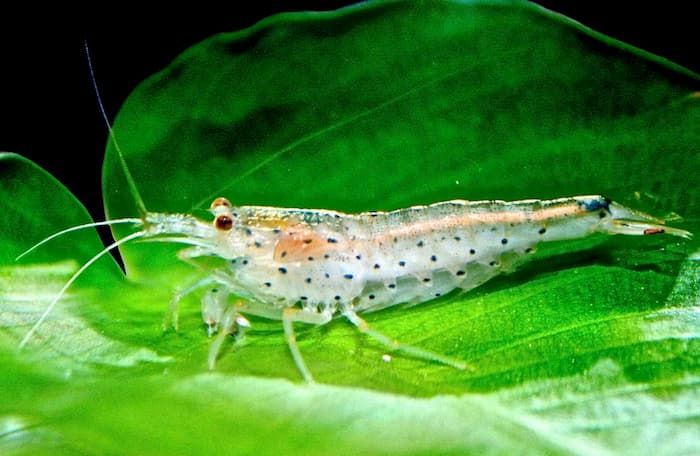 Just like Cherry Shrimp, Amano Shrimp is popular for controlling algae. Also, they are also a very popular specie of shrimp. They are not usually tall only about 2 inches. Thus, they are regarded to be a dwarf species of shrimps. Amano Shrimp are capable of surviving in freshwater aquarium with a water temperature of about 70-80 degree Fahrenheit. If you want them to breed properly, do not hold them in captivity. 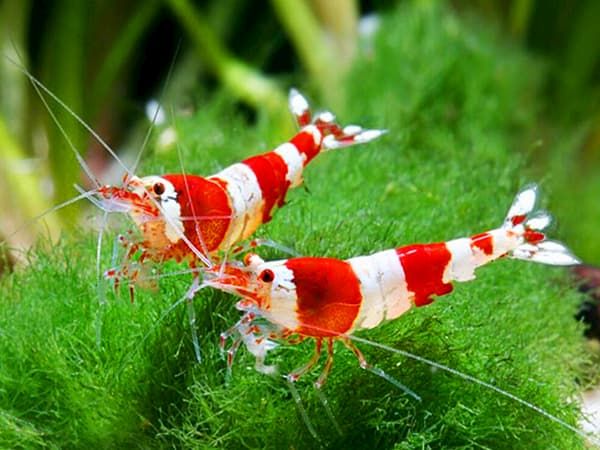 Crystal Red Shrimp also called Red Bee Shrimp. It is notable for having a white background alongside red patches along its body. It is always difficult for novice aquarists to handle this shrimp as they require a lot of maintenance. To get the best from this shrimp, they must be kept in the appropriate water temperature because they require lots of maintenance. They are an important part of the nitrogen cycle as well. When plants are planted close to the aquarium, these shrimps absorb excess nitrate in the plant. It is also important that they are kept in freshwater with a pH of about 5.8-7.5 with constant water temperature. 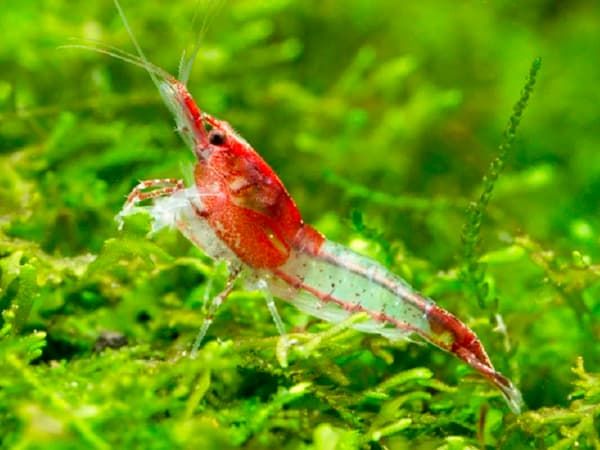 Red Rili Shrimp is a breed of Red Cherries. It does not grow beyond one inch as such, they belong to the dwarf species of shrimps. They rely on the presence of some plants and ornaments to hide while also feed on algae. If you are desirous of specie of shrimp, which you can breed without much difficulty, the red rili shrimp is the ideal shrimp for you. 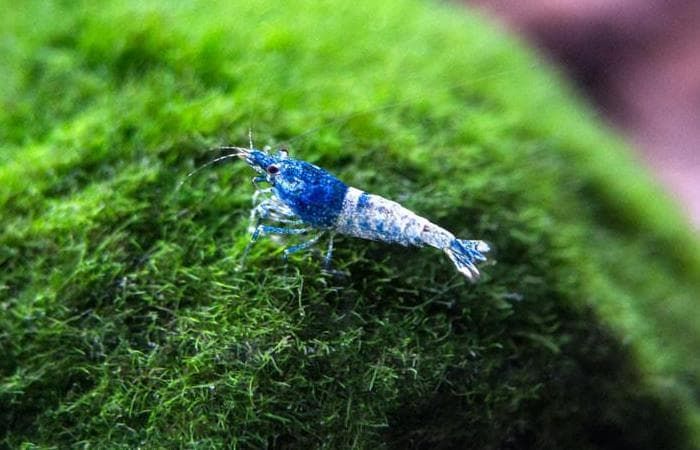 Blue Bolt Shrimp is a blue and white variant of the bee shrimp. They can survive their environment so long as there are no bigger fishes to eat them up. If the aquarium is conducive for them, they will experience no problem or issue breeding. But to do this, they require the right water temperature. 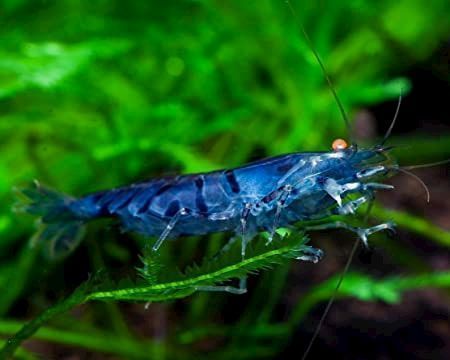 They are also known as an orange-eyed blue tiger. It is also known as the orange-eyed blue tiger. It is dark blue colored with black stripes adorning its body. For its survival, the pH of the water is to be kept at 6.0-7.5. Blue Tiger Shrimps are compatible with peaceful species just as they are. If they are to be kept with fishes, it is necessary to provide them with a lot of hiding places to ensure that it survives. 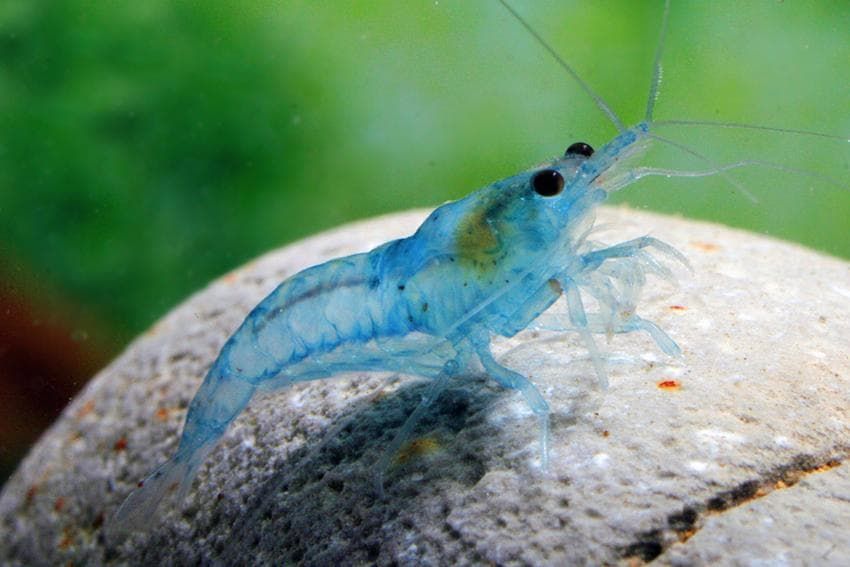 It requires absolute maintenance and care for it to be at its optimum result. Blue Pearl Shrimp thrives well in a planted aquarium. Its feed should be filled with a sinking pallet and blanched vegetables. With the right diet and appropriate water temperature, they experience no difficulty in breeding. 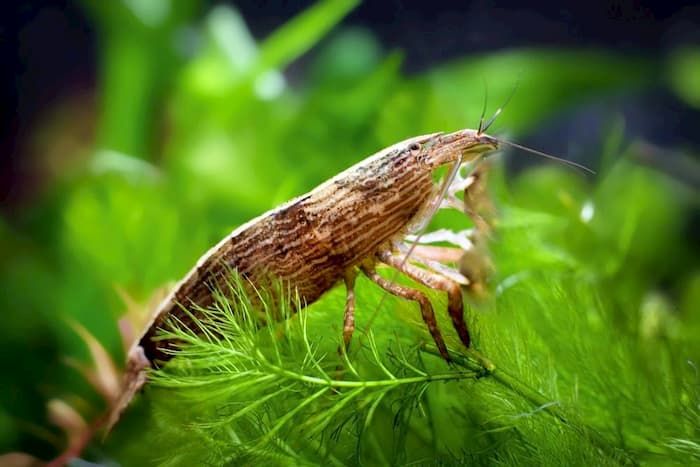 It is also known as wood shrimp. It has a reddish-brown color and is slightly bigger than the dwarf species of shrimp. It is easy to differentiate the males from the females. The appearance of their physical structure makes it easy for them to mate. They possess specialized fans for catching food particles and putting foods in their mouths. It is easy to feed Bamboo Shrimp with a variety of food. 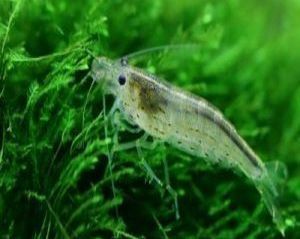 Ghost Shrimp is transparent in color and relies on the planted aquarium to hide. It has a small size but is also capable of surviving in any type of environment where it is found. More so, it is capable of hiding with plants and appears unseen as a result of its color. This type of shrimp is able to adapt to its environment without much difficulty as a result of its color. 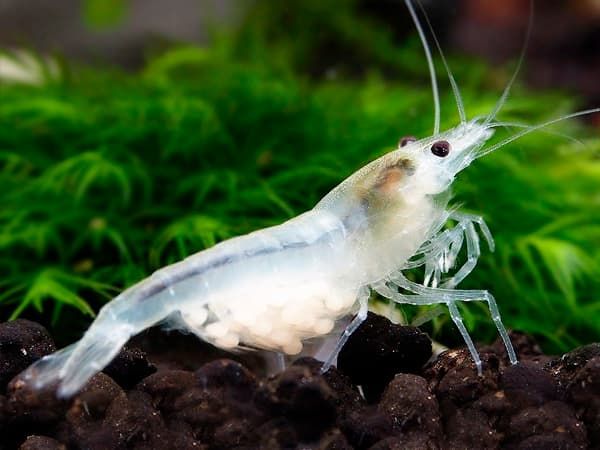 Snowball Shrimp has a translucent color and is the ideal type of shrimp for beginners. They are easy to care for but require a stable water temperature to function well. If they are kept in a conducive water environment, they will experience no difficulty in breeding. As they age, they also shed their exoskeleton. 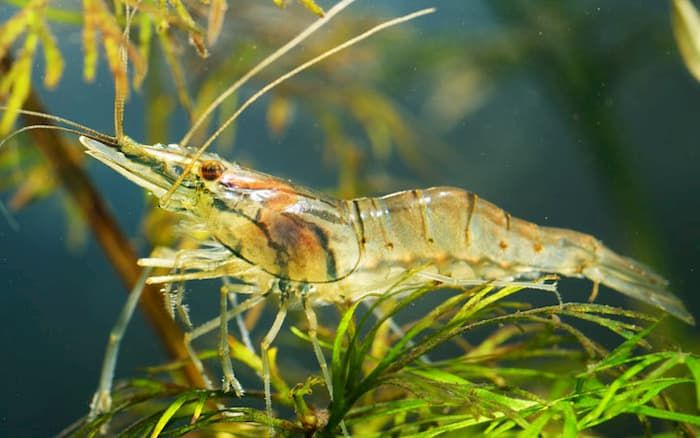 Indian Whisker Shrimp is quite similar to the ghost shrimp, although it is quite larger as it can grow to a whole inch. It is an aggressive species that can attack other species that are kept with it in the same environment. Interestingly, they can survive different water parameters and not be affected in any way. 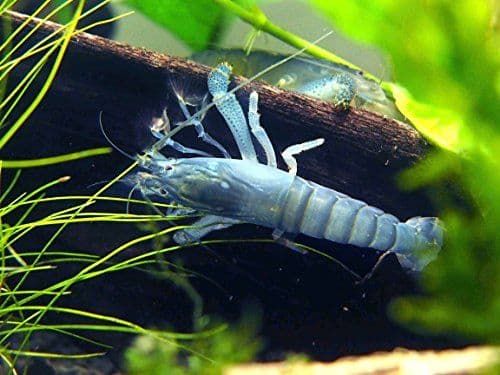 This shrimp is quite similar to the freshwater crayfish. The only difference between the freshwater crayfish and the Vampire Shrimp is that Vampire Shrimps are filter feeders. They have special fans for catching food particles as they float. It can grow to about 6 inches and possesses fans for feeding. Nonetheless, it sometimes experiences issues in feeding and requires a smaller size of food. 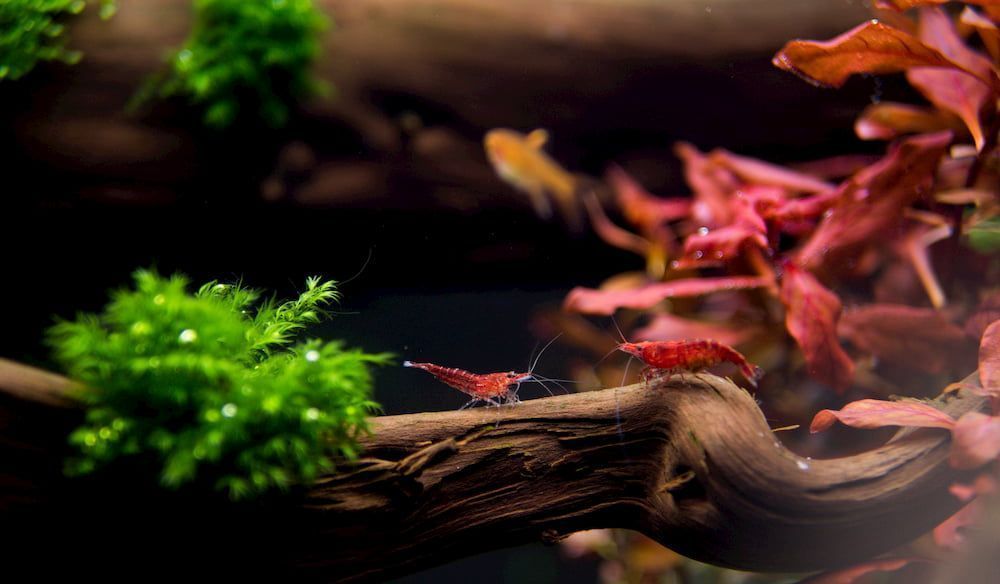 Photo by Máté Molnár on Unsplash

READ MORE: How to take care of freshwater aquarium

🦐 What do freshwater aquarium Shrimp eat?

Well, the answer is quite simple! Freshwater aquarium shrimps eat a whole lot of things. They could feed on algae, worms, dead and living plants, and even other dead shrimps. Secondly, the feeding habits of the shrimps vary according to their type. The dwarf shrimps consume any food offered to it but prefer algae. Bamboo shrimp rely on its filter to help it trap microorganism and foods on its pellet.

🍤 How to keep Shrimp alive in an aquarium?

The survival of the shrimp depends on the level of research conducted. Thus, before taking your shrimps into the aquarium make sure to find out the type of environment that is necessary for its survival. Also, ensure that only one type of specie is kept in one tank. In addition, the water parameters must be steady and there should be lots of hiding spaces in the aquarium as well.

🐟 What to feed aquarium Shrimp?

🐠 How many Shrimp per gallon aquarium?

Dwarf shrimps do not require so much space. At least a 5-gallon aquarium is sufficient to accommodate the aquarium shrimps so long as there is provision for filtration and an avenue to change the water.

🦐 How to catch Shrimp aquarium?

It is not difficult getting hold of the aquarium shrimp. All that you require is the right guide on how to make your own trap. An easy way to do this is to make use of a soda bottle. Cut the top off the bottle and put some gravel into it to weigh it down. Put some of the shrimp favorite food into the soda bottle and put it carefully into the tank. Of course, the shrimps would get attracted to the food and will find their way into the bottle but will experience difficulty coming out of it. 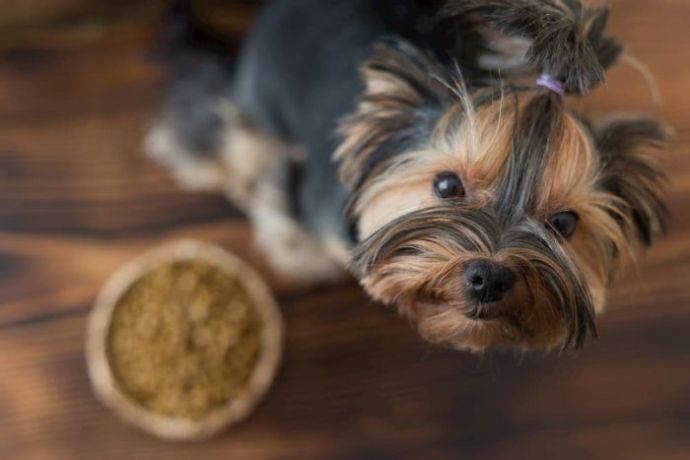 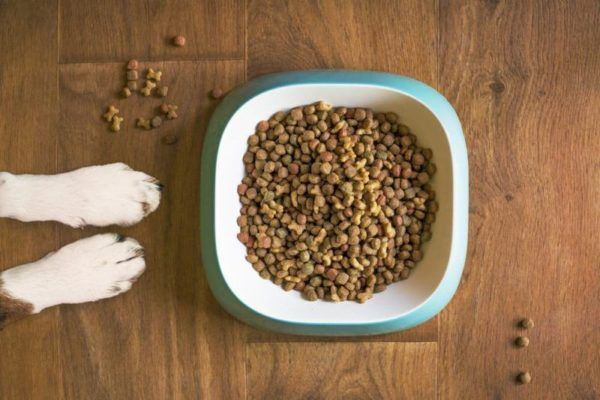 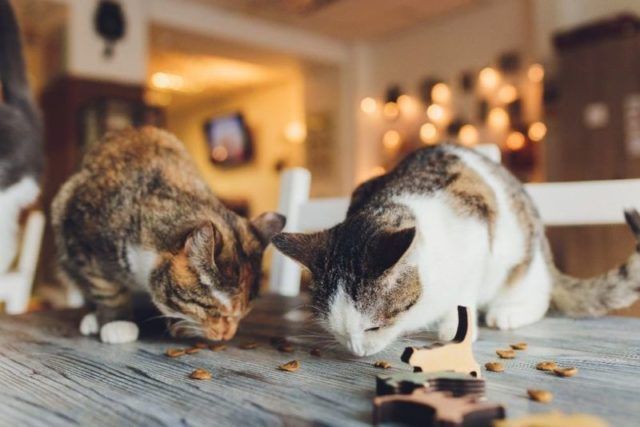 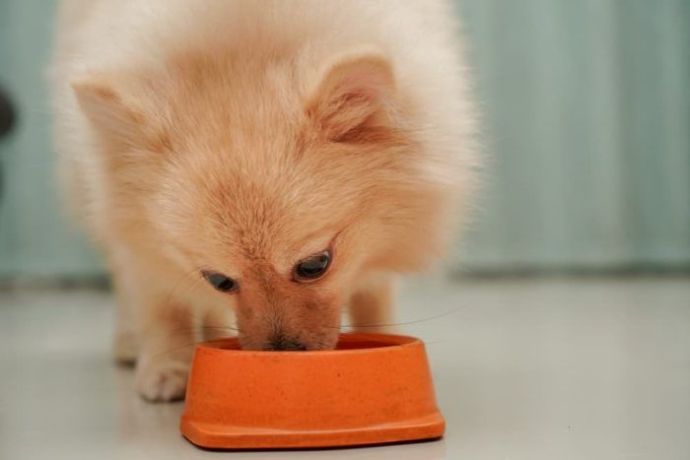 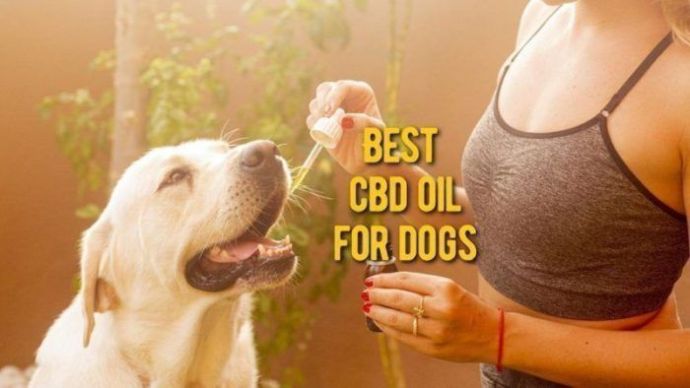 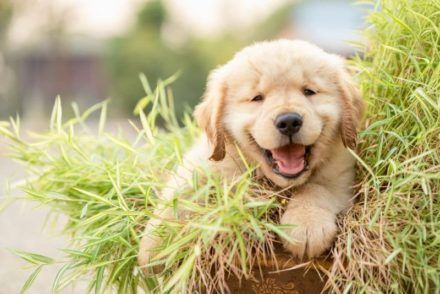 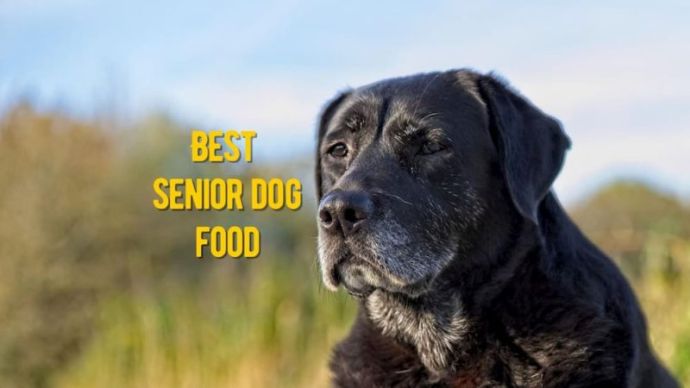 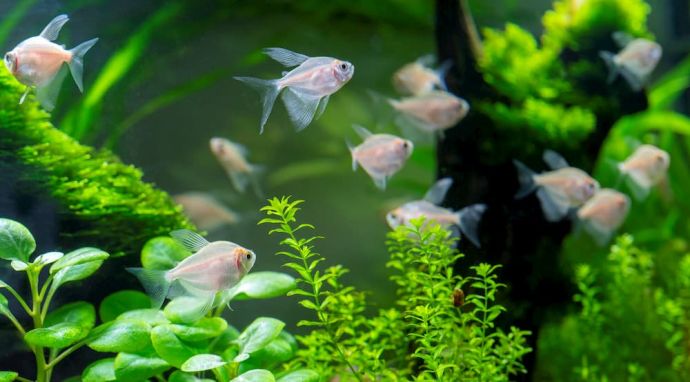