Easiest Saltwater Fish to Breed – A Guide For Beginners

Written
by Alina Andreeva
View all 68 articles Learn about our editorial process and veterinary review board.

Breeding fish in a saltwater environment for the very first time can be extremely exciting and rewarding. Of course, a huge part of the process is choosing which fish to breed. However, you should always take your time and gain experience before jumping in at the deep end. Do not try to run before you can walk!

As a beginner saltwater breeder, it would be unwise to choose some of the trickiest fish on the market. In fact, it would be unfair on the fish and a foolish investment on your part. Ease yourself into the world of saltwater breeding by highlighting some simple starter fish. Once you master these, you can then move on to more exciting and complex options. Luckily for you, we have written a comprehensive guide to all things saltwater breeding, especially for you beginners! 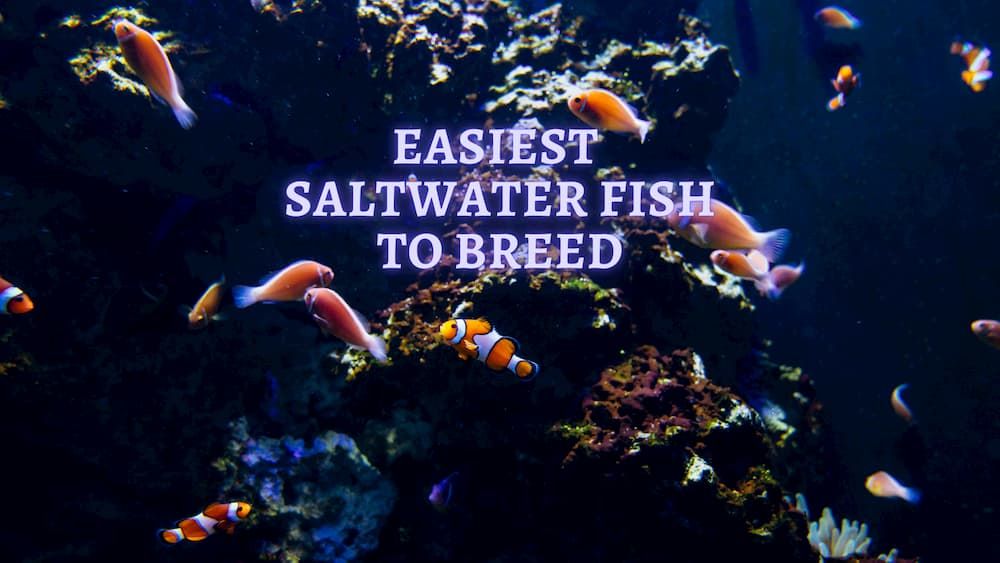 Photo by Kelly Lacy from Pexels

Before we start listing names of saltwater fish and the details behind them, we want to mention the term ‘live-bearing’. Live bearing fish are those that give birth to live fish, rather than laying eggs. These live-bearers are far easier to breed as the parents mate easily when compared to their egg-laying equivalents. Not only this, but the livebearer fry fish are easier to care for after birth with regards to both food and location. With live-bearing fish, you will see little fry swimming around within seconds of being born, while eggs will take some time to hatch. Whether you choose live-bearing fish or egg-laying fish, you should always look to keep the fry away from adults. Believe it or not, if you keep them all in the same tank, the babies may become dinner!

How to Breed Saltwater Fish?

Of course, you should be looking for healthy and sexually mature fish to breed with, as well as choosing the recommended sex numbers/rations for that particular species.

Think of this as the fish equivalent of a candlelit meal and some sexy music. Different species of fish have different cues for this kind of thing. These cues can include temperature, food, nesting material, alone time, photoperiod, and more. Simply look up what your species likes.

You need to provide optimum nutrition for both the breeding parents and the fry after they are born. If you fail to do so, you will have a fair few fatalities on your hands throughout the process.

Choose some easy options before making your way towards the harder species. For example, beginner saltwater fish can include gobies, cardinalfish, clownfish, damselfish, and dottybacks.

Here are examples of the best fish to breed in saltwater tank: 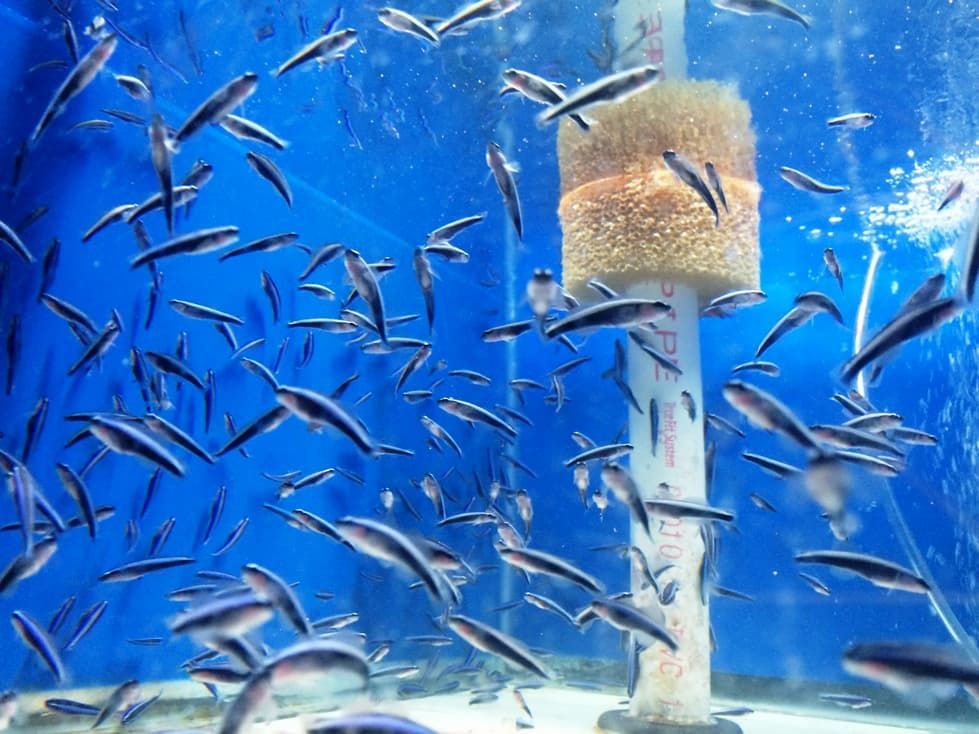 These are very popular modern fish as they are one of the few that can happily live and breed in very small systems. While the fish only live between one and two years, in that time, the female can lay upwards of 500 eggs per spawning event. In terms of gender roles, the female Goby carries the eggs, lays them, then the male is the primary caregiver until the eggs hatch.

However, as soon as the fried fish are born, all parental care ends. They are ideal for captive breeding as they spawn on stationary surfaces. However, be careful when putting them in the same tank as any ambush feeders, as they may be at risk. Neon Gobies like to live in water temperatures between 72 and 78 degrees Fahrenheit and with a PH of between 8 and 8.4. They usually live off a diet of tiny bits of meaty foods. They usually mate around the middle/bottom of the tank. 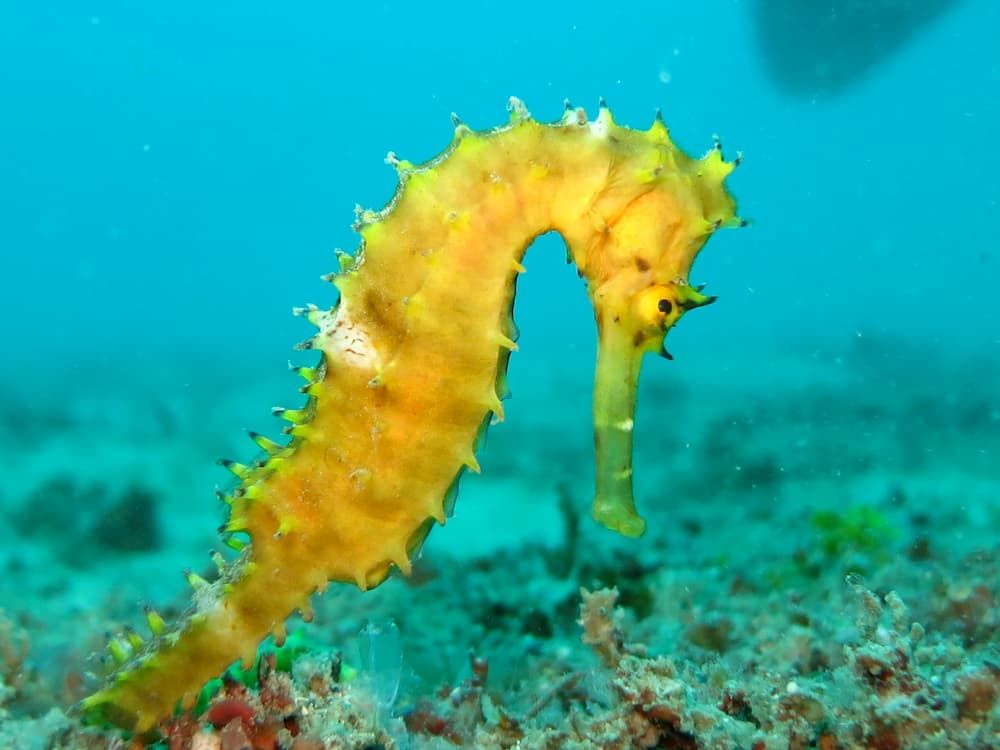 Image by Arhnue Tan from Pixabay

Who doesn’t want a seahorse to add to their marine collection? And, to be honest, it isn’t very difficult to get two seahorses to mate. The tricky task is rearing the young due to the need for high food density. The interesting thing with seahorses is that the males are the ones to carry the eggs, rather than the females. They incubate the fertilized eggs for between two and four weeks before they are born.

However, it is best to ensure that the birthing is done in a separate tank as baby seahorses do not do well in community systems. They are docile and peaceful, as well as being very slow, meaning they often get outcompeted for food. Common seahorses like to live in water temperatures between 72 and 78 degrees Fahrenheit and with a PH of between 8 and 8.4. They usually live off a diet of meaty foods such as plankton, brine, or mysis. 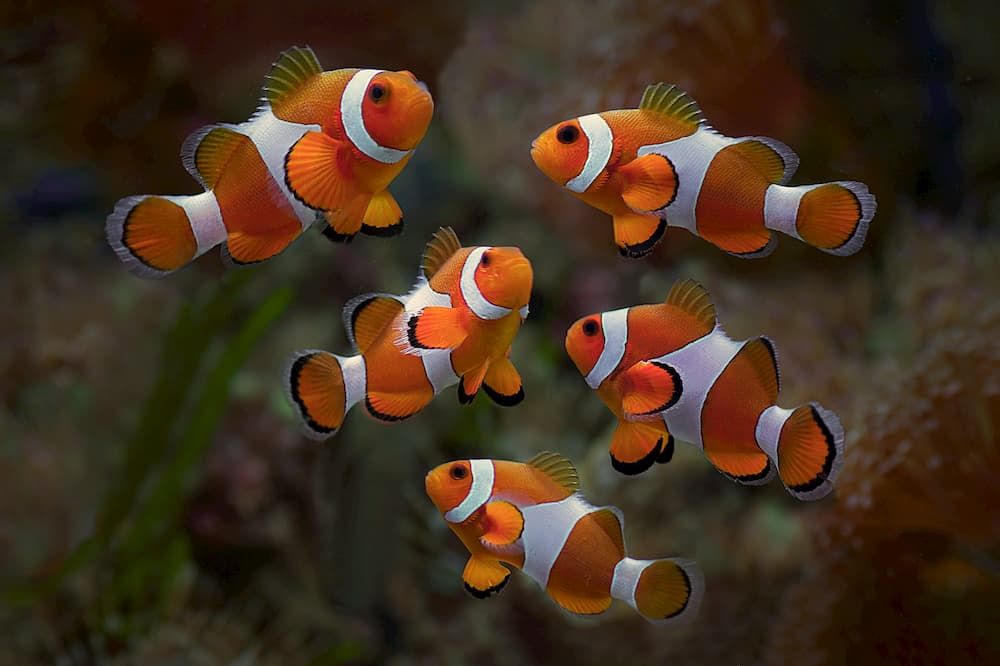 Clownfish are perhaps some of the most interesting marine fish to breed, not only due to their bright colors but their unique gender biology. Every single clownfish fry starts life as a sexually immature male. As they grow up, they eventually become mature males and can then transition into breeding females. This means that, if a breeding female dies, they can be replaced by their male mate.

However, this reproductive adaptation can only occur one way, so males can become females but not vice versa. Clownfish like to live in water temperatures between 72 and 78 degrees Fahrenheit and with a PH of between 8 and 8.4. They usually live off a diet of meaty foods supplemented by raw seaweed. In terms of the tank, they usually mate wherever they consider being home, although they prefer the bottom third of the tank. 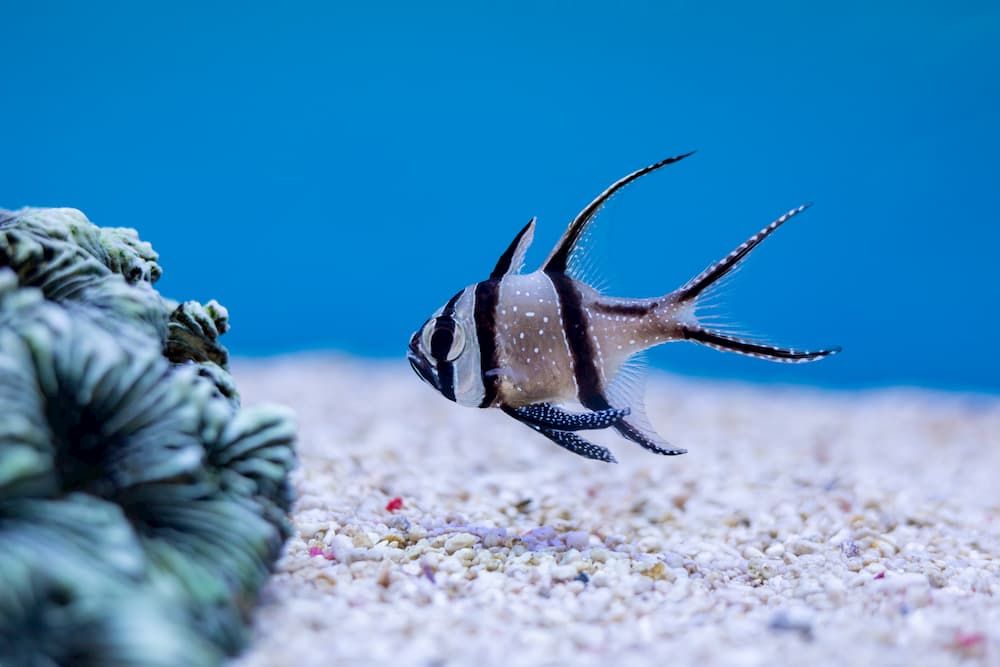 These are often popular fish to breed as they are very easy to keep, especially if born within the tank itself. They do not require huge amounts of space in which to roam and are also not picky in terms of food. However, you should not house them with any aggressive fish. You should also look to house them in their mating pairs as multiple males can become aggressive towards one another.

Even more interesting than the seahorse, the male cardinalfish are in charge of gestating the fertilized eggs in their mouths until it is time for the fry fish to be born. This means, due to the lack of mouth space, there are only 12 to 50 eggs per spawn. After three weeks or so, the fry will emerge fully developed from the male mouth.

Cardinalfish like to live in water temperatures between 72 and 78 degrees Fahrenheit and with a PH of between 8 and 8.4. They usually live off a diet of meaty foods. They usually mate around the middle/bottom of the tank. 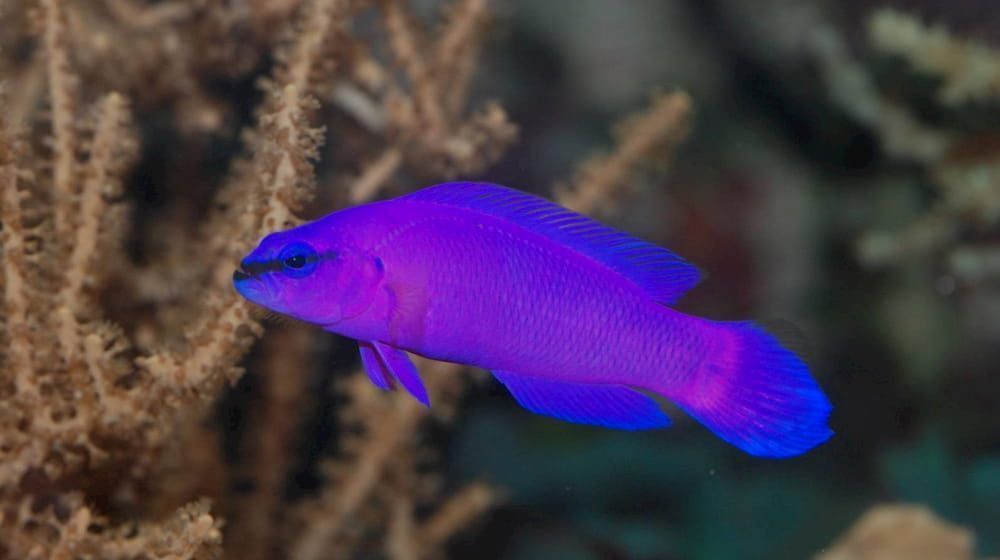 The opposite of clownfish, Orchid Dottybacks feature females that can turn into males. The male Dottyback is in charge of almost all of the care when it comes to parenting. They will attract female Dottybacks using mating dances outside of their caves. The female fish will then deposit as many as 1,000 eggs, which the male will guard for between three and six days until they hatch.

Dottybacks like to live in water temperatures between 72 and 78 degrees Fahrenheit and with a PH of between 8 and 8.4. They usually live off a diet of meaty foods, particularly plankton. They usually mate around the middle of the tank. 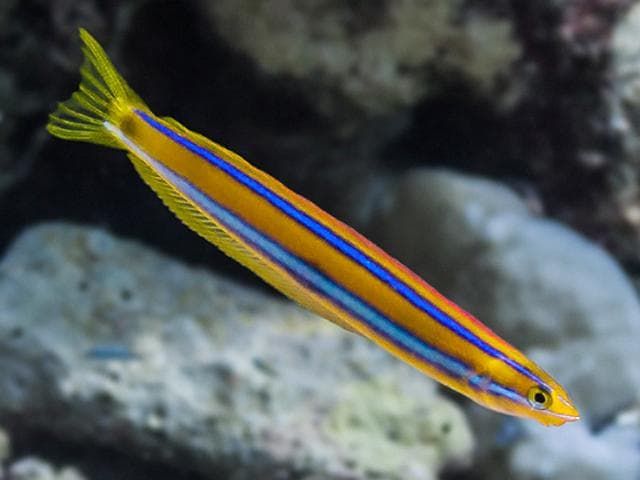 Fang Blennies are known to breed pretty easily and often when kept in captivity. They often form mating pairs, however, are best kept in harems. However, due to a lack of obvious sexual dimorphism, is can be difficult for them to form these pairs, hence why it is more efficient to keep them in groups. Once a male and female pair up, you can then remove the other males to avoid any confrontation.

While the female Blennies carry the eggs, once they are deposited, the males are in charge of taking care of them. In fact, a male Blennie may keep/protect eggs from multiple females in one nest. These eggs usually take eight days to hatch. Fang Blennies like to live in water temperatures between 72 and 78 degrees Fahrenheit and with a PH of between 8 and 8.4.

READ MORE: What saltwater aquarium filter system do you need? 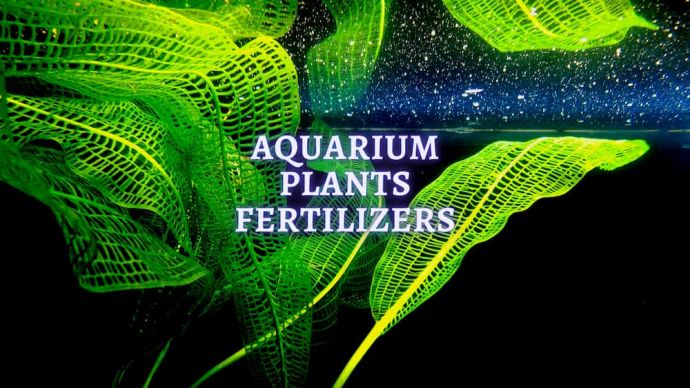 Aquarium Plants Fertilizers: What You Should Know 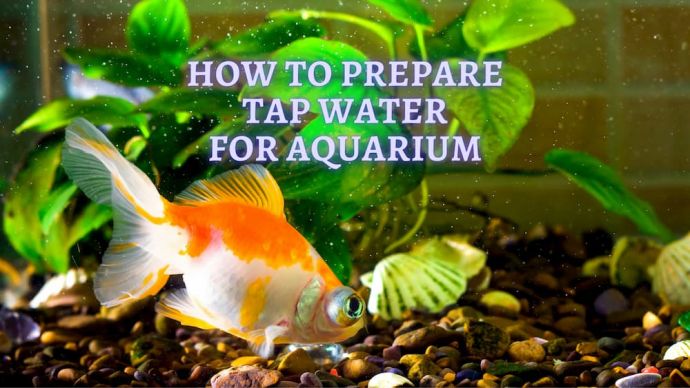 How to Make Tap Water Safe for Fish? 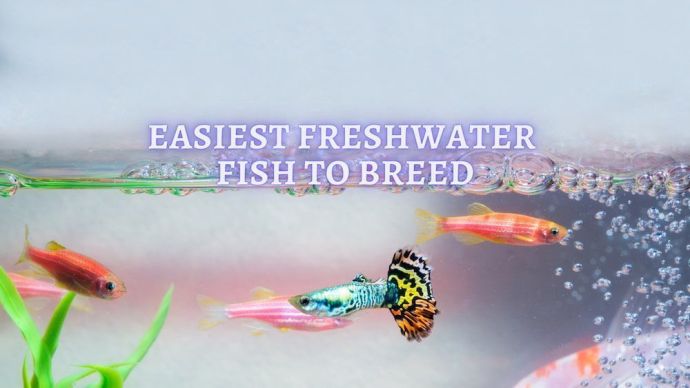 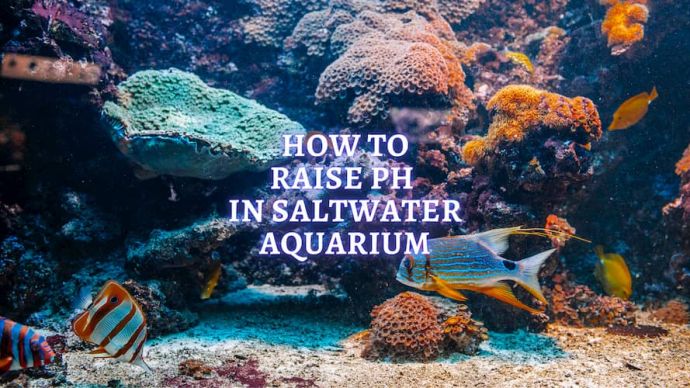 How to raise PH in Saltwater Aquarium? 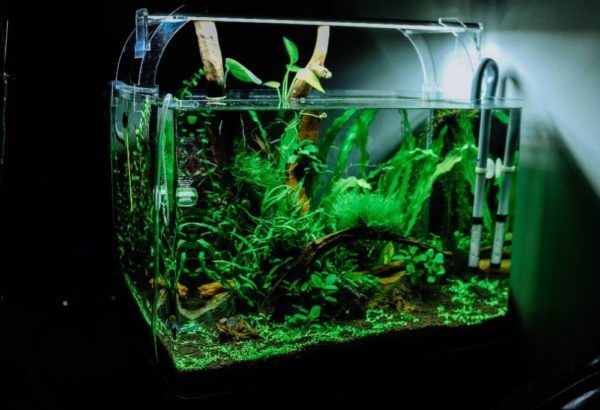 What is a good Ammonia level for Freshwater Fish? 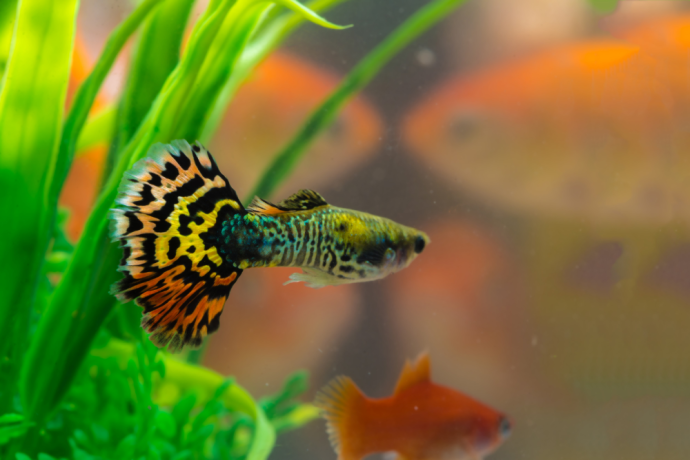 What’s a good Starter Fish for an Aquarium? 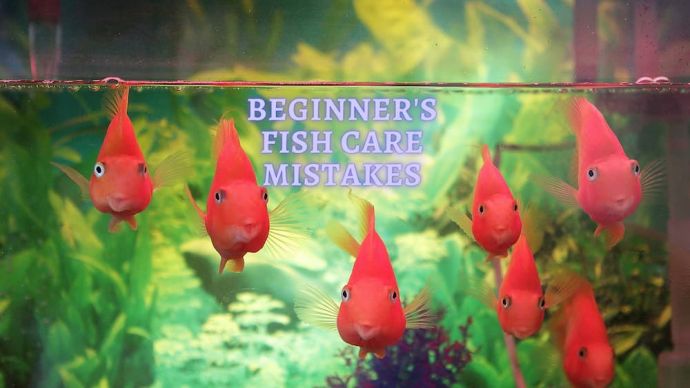 TOP-6 Mistakes Beginners Make in Caring for their Fish

Gourami Tank Mates: 20 Fish that can Live with Gourami