Seahorses are incredible creatures which have very individual needs, requiring specialized systems and a good deal of dedication to keep them healthy. These days, coral tanks are quite popular since so many different critters are compatible with them. With that said, though, your seahorses are really deserving of their own dedicated “species tank”. 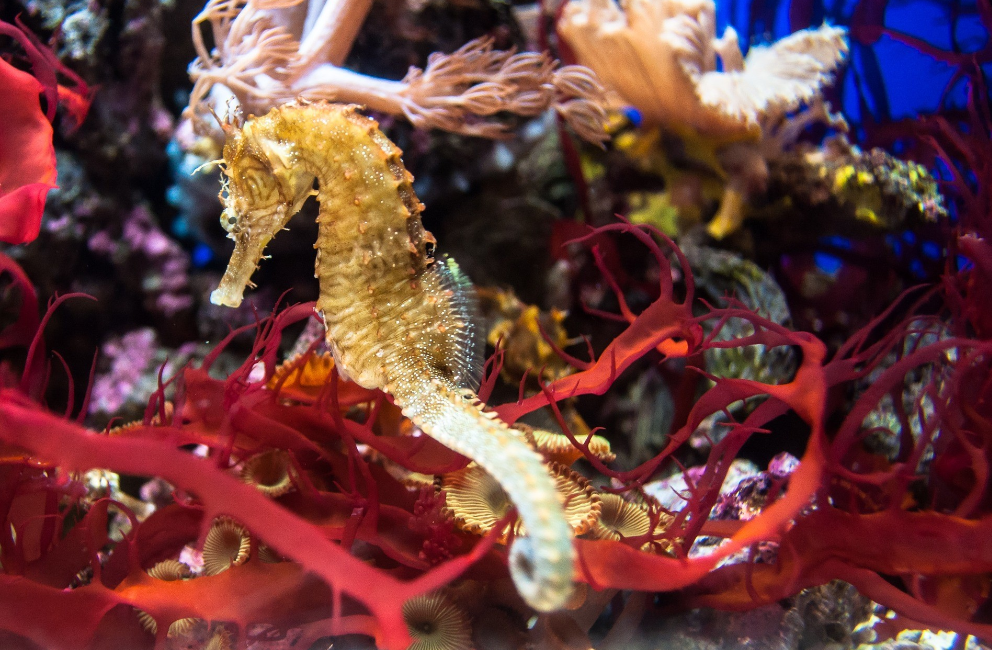 Can you have a Seahorse as a Pet?

Yes, you can. Although they require unique care, seahorses are easy to keep and even breed, if you maintain the right setup. The key is to invest in the right tank system and pair your seahorses with the right tank mates. From there, it’s really only a matter of feeding them the right food. You’ll soon see just how rewarding seahorses are to care for and how fun they are to observe. But, let’s start by going through some interesting things you should know about seahorses.

There are no laws against owning seahorses in the United States, but they can be expensive. The average cost is about $100 for 10 dwarf horses, but the price can range drastically depending on if you’re buying a wild-caught or tank-bred seahorse, alongside other factors.

Seahorses are also somewhat unusual in the way that they attack their prey. They use a mechanism known as elastic recoil feeding that lets them rapidly snap their head forward with the energy they store in specific neck muscles. All of this is the behavior you’re sure to witness when you feed your seahorses every day, but first, you’ll need to figure out a few other essential details. 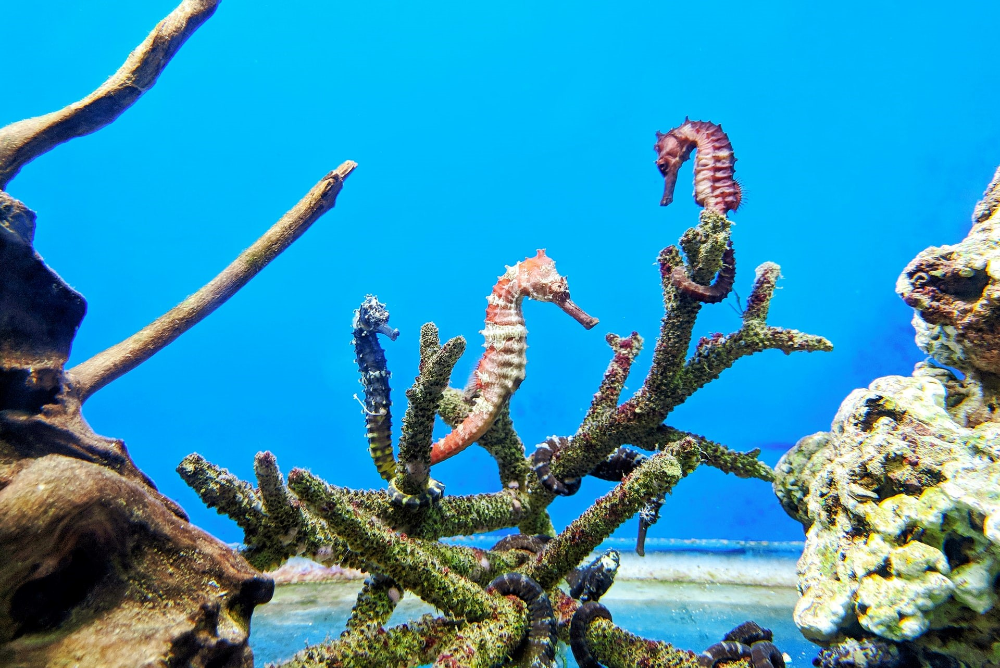 One of the most common questions people ask is: What size tank do seahorses need? In reality, it’s not just the size of the tank, but the important tank setup. Your aquarium for your seahorses won’t be much unlike the saltwater aquarium you would prepare for another fish species.

Below are the specific steps for preparing a dwarf horses aquarium:

Inside the tank, remember that seahorses live and act differently than other fish. They don’t need hiding spots, but they do need hitching posts. They are what your seahorses will hold onto with their tails when they go to rest. There should be plenty of room so that all of your seahorses can hitch on when sleeping. Realize that live (stinging) corals aren’t useful hitching posts, but you can use real or artificial plants and seaweeds. For example, seahorses love Marineland bamboo!

You can also make your own hitching posts out of the PVC pipe. Although they won’t look natural, the seahorses will not care, and they are actually highly effective within these environments. Alternatively, you can buy larger artificial structures, like Marina mangrove root, so that you can easily clean and handle what’s in the tank without sacrificing the appearance of your tank.

READ MORE: What should the Ammonia level be in a Freshwater Tank

The lifestyle of dwarf horses is measured and slow. They are calm and non-aggressive, so they need neighbors with a similar temperament. 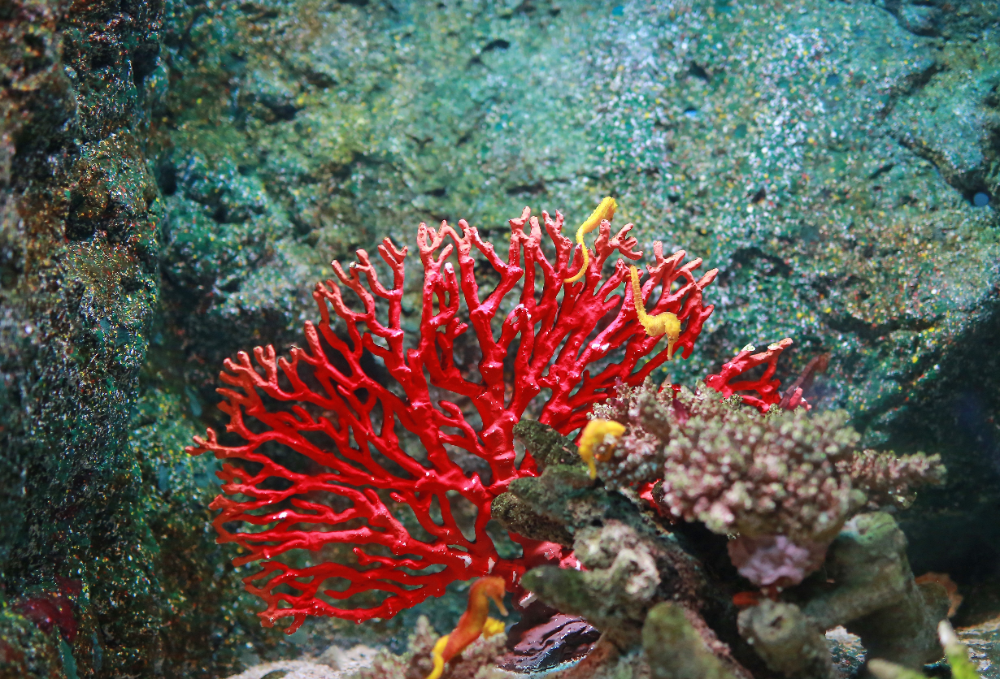 Fish most suitable for dwarf horses are small, not fast, inactive, cautious, not dangerous, and not competing for food fish. For example, gobies, cardinal, pipefish, dragonets, and firefish.

Adults of this type of fish have a large head and large eyes. These fish can live in brackish conditions. They live in the water column or near the surface.

Cardinal is a small fish from the carp family. This small, cold-water fish must be kept in groups of at least 6-8 individuals.

Members of the pipefish genus have a very elongated, needle-like, narrow body. Needles like to pop out of the water, so the aquarium should be closed with a lid.

Dragonets are small marine fish from the diverse family Callionymidae. Their bodies are elongated and without scales. Dragonets have flat triangular heads with large mouths and eyes; their caudal fins are fan-shaped and pointed.

The firefish has an elongated body with a bright red-pink color. Aulonokara red dragon has a peaceful nature, and these fish can be easily kept in a typical aquarium with other non-aggressive representatives.

Also, dwarf horses can be kept with different snails that will clean the aquarium from food residues.

The main factor that allows you to determine a good neighbor is its low activity. Highly active fish will irritate the sea horse, suppress them, and select food — for example, Damsels, Triggers, Tomato Clowns, Anemones, and any aggressive fish.

Also, sea horses can be harmed by anemones, corals with stinging tentacles, and some clam crabs that can pinch the sea horse, giving it a wound.

READ MORE: How to take Care of a Freshwater Fish Tank

Feeding will definitely be the most involved part of caring for your seahorse. Seahorses are picky eaters, to say the least, so never expect them to simply accept the food you prepare for them, be it flakes or pellets. Even whole, frozen foods may be rejected. It all depends on your particular seahorse. When it comes to feeding, tank-bred specimens will be easier to deal with than wild-caught ones, who are quite finicky.

Tips on how to feed Seahorses

What to feed Sea Horses

Food is put in tank feeders, the fish swim up and eat at a convenient time. Feed dwarf horses 2 to 3 times daily but do not overfeed.

Types of Seahorses for Aquariums 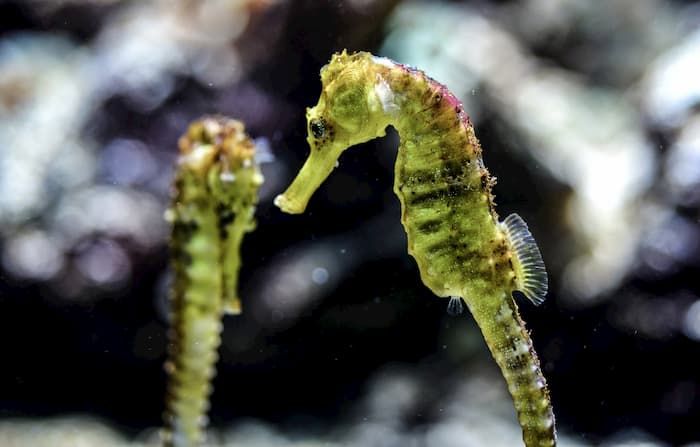 Sea horses are very peculiar fish with an outstanding appearance and an exciting biology. There are about 50 known species of dwarf horses. The most common of them are the following:

It is one of the largest representatives of this unique fish species. As a rule, this type is found in the waters surrounding the coast of the kangaroo continent of Australia and New Zealand lying nearby.

This sea horse species’ habitat is the coast of Pakistan and India (up to Japan’s southern beaches, Hawaii, and the Society Islands). There is dubious evidence of its presence off the coasts of Madagascar and South Africa.

One of the most exciting representatives of these animals is Hippocampus denise, which belongs to dwarf sea horses. The sea inhabitant does not exceed one and a half centimeters in length and has an amazing mimicry ability.

In 1996, it was found that these sea horses are a unique species whose looks and habits are similar to other representatives of these fish.

The biological features and structure of these excellent fish are beautiful. This sea horse lives in the Black and Azov Seas. The body of the dwarf horse is covered with a shell, with characteristic branched skin growths, in the form of a hump and furrows. The tail is coiled, and there is no caudal fin. The head is covered with small bony shields, and it very much resembles the head of a horse.

Hippocampus satomiae is an extremely interesting marine life. It is found only in one place on the planet, namely in the waters that wash Sulawesi’s coast.

Hippocampus erectus is a fairly rare species, although its habitat is quite extensive. This type of sea horse is found along the Atlantic Coast of the United States and the Gulf of Mexico.

Hippocampus ingens somewhat resembles Hippocampus reidi in appearance, as it also has a rather long snout, elongated body, and long tail. However, despite the striking external similarity, these sea horses are a different species, since their similarity is limited exclusively to external anatomical features.

Phyllopteryx eques, according to its biological characteristics and taxonomy, belongs more to the species of sea needles than to sea horses, but scientists often classify it as a representative.

To determine whether your sea horse is healthy, first of all, you should pay attention to its color. If the health is not normal, they lose their yellow color and turn pale. Sea horses are susceptible to most of the diseases that other fish suffer from. The absence of scales increases injuries from bruises, cuts, and skin parasites. It is necessary to have a separate quarantine container for processing newly arrived and sick fish. To maintain health, monitor water quality, and appropriate filtration.

The breeding process of dwarf horses is quite complex, even in the wild. For captive breeding, it is necessary to recreate their natural habitat.

Sea horse spawning begins in late summer. The beginning of the fish’s mating season is determined by the lunar cycle and the beginning of low tide. Fish pre-form pairs that differ in their loyalty. Courtship begins with a mating danc that starts with the female moving vertically in the water column, followed by the male. Gradually, the dance becomes more complicated, and the animals begin to make clicking sounds. In this dance, synchronicity is essential; this is the secret of the successful mating of dwarf horses.

For breeding to be successful, it is recommended to keep only sea horses in the aquarium. Other species of fish can eat the offspring that are hiding in the weeds. You should be wary of crustaceans and shrimp, which also pose a danger to young animals.

✔ Are Sea Horses Saltwater or Freshwater?

Sea horses are mostly marine fish that live in saltwater. Some individuals live in freshwater; however, they are actually freshwater pipefish.

✔ How much does a Sea Horse cost as a pet?

Sea horses cost about $100.00 for 10 dwarf horses. They also require a lot of care, which also costs a lot of money.

✔ Can sea horses live with other fish?

Sea horses get along well with measured and slow-moving fish species, such as gobies, cardinal, pipefish, dragonets, and firefish.

An ordinary dwarf horses can live for four to five years.

Of course, if you go through the trouble of doing things right, it will be worth it in the end! After all, adequately cared for seahorses can thrive for years in captivity, so enjoy your new pets.