How to Maintain a Saltwater Fish Tank?

Marine fish are a little more challenging to keep than their freshwater counterparts. However, you do not need to be a professional in this business to maintain a marine aquarium. As with freshwater fish, there are some types of saltwater fish that are harder than others. There are several basic requirements that all the marine aquarium inhabitants will be provided with the proper comfort level.

Saltwater aquarium today has become a more accessible hobby. To date, there are many examples of keeping small saltwater aquariums using the method of water substitution of 10% per week, which allows you to abandon the complex equipment and complicated way of maintaining a saltwater aquarium. 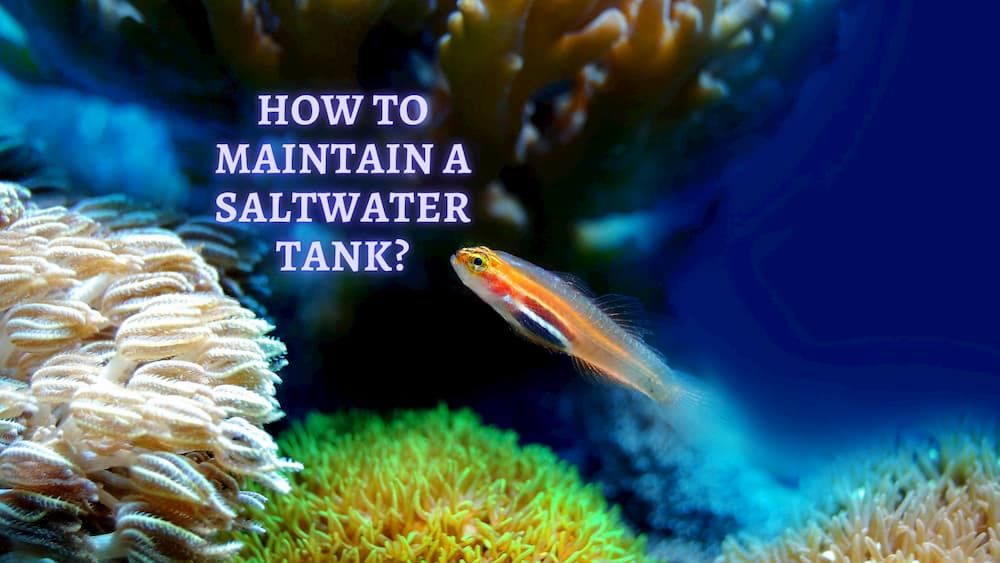 Image by @marcelokato from Pixabay

This article describes only the basic concepts since a large aquarium’s care, and maintenance is radically different from freshwater aquariums. This requires specialized knowledge and skills.

Installing an aquarium is a time-consuming process, but you will soon be admiring the beautiful fish with an effort. All aquariums can be divided into two types (depending on the water that is in them) – freshwater and saltwater.

First, think about which fish will populate it. Some species of fish simply cannot exist in fresh water and will die. If the inhabitants of your home sea depths will be exotic bright fish, then, most likely, you should get an aquarium with seawater.

Preparing the water for a saltwater tank is no different from preparing water for a fresh one. The water must be protected for two to seven days, and it must be cleaned of chlorine, ammonia, and other harmful chemical compounds. Then salt is diluted in water. It is better to buy one that is designed specifically for aquariums. This salt is sold in every pet store and has instructions.

To understand how to maintain a marine aquarium, you need to realize that there are some requirements that, of course, need to be met.

Fish that are used to seawater love space, so they should choose longer aquariums. During the tank preparation, it is better to wash it without using detergents – instead, it is better to use dichloride. Before pouring water, prepare the soil and objects that will be in the aquarium.

If you plan to install synthetic plants or houses for fish, pay great attention to how these items react to saltwater: if they react chemically with seawater, immediately abandon them because harmful substances can lead to fish’s death.

Also, before filling the tank with water, take care of the lighting. After that, you can fill the aquarium with saltwater, but do not rush to let the fish into the aquarium.

The water in the marine aquarium should settle for another month – this period is necessary for the aquarium environment to ultimately turn into a marine one. When this period passes, gradually launch fish into the aquarium, but no more than two species per week. 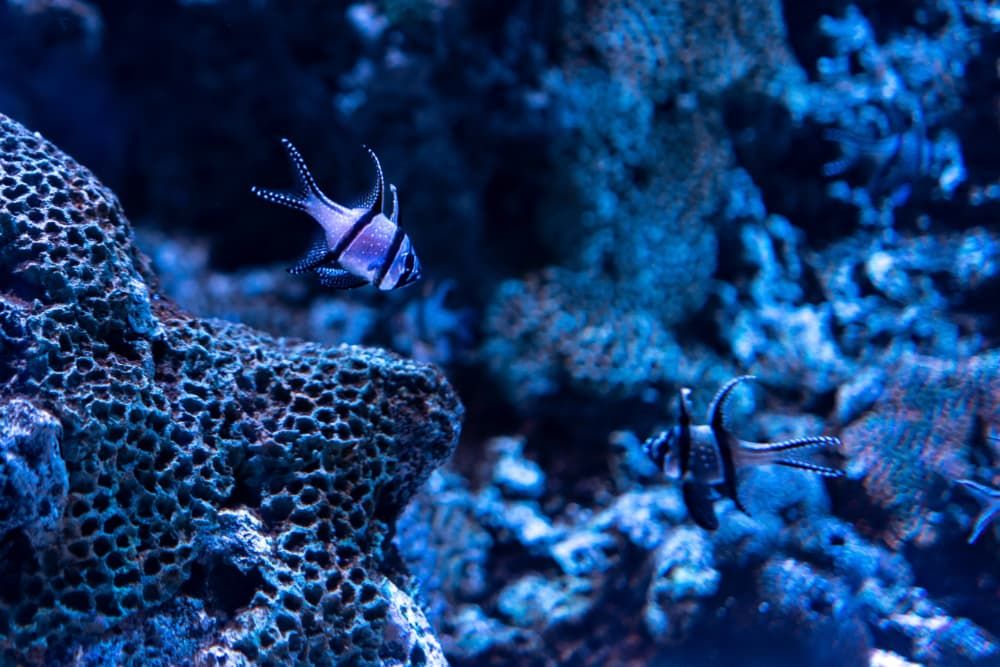 One of the main physiological differences between marine fish and their freshwater relatives is their attitude to the aquatic environment. In freshwater fish, body fluids have higher salinity than the surrounding water, so they constantly absorb water due to osmotic processes, which creates the danger of tissue oversaturation with liquid. To compensate for this process, freshwater fish rarely drink water, and their kidneys secrete copious urine to rid the body of excess water.

In marine fish, on the contrary, body fluids are less salty than the surrounding sea. So they lose water to the environment and ironically are in constant danger of dehydration. To compensate for this, sea fish drink seawater and secrete small but highly concentrated urine. In both marine and freshwater fish, only water enters or leaves the tissues due to osmosis. Other substances mainly enter the tissues from the gastrointestinal tract. Since marine fish constantly swallow water, they are much more susceptible to poisoning by substances that pollute the water than freshwater fish.

All fish released ammonia into the water, but marine fish are much less tolerant of the accumulation of this waste product in the water than freshwater fish. This means not only that the marine aquarium needs a more powerful detoxification system than the freshwater system.

The tips below are designed to help you avoid the most common mistakes. Stick to the rules until you get enough experience.

Pay more attention to maintaining good water quality. It is necessary to maintain a constant level of temperature, acidity, pH, and salinity in a marine aquarium. Check the water parameters daily and make the required changes immediately. Clean the filter regularly to prevent water turbidity.

Sea fish need a lot of space. The space required depends not only on the adult size of the fish but also on their natural lifestyle. Fish that usually stay within a relatively small area, such as clownfish, are more likely to tolerate confinement in an aquarium than actively swimming species, such as surgeonfish. Even the largest aquarium looks tiny compared to the vast ocean around the coral reef. The tank size you choose will most likely be determined by the availability of space and money. If you have enough space and money for a 10-gallon aquarium, it’s stupid to buy fish that need a 50-gallon aquarium. Choose species that are proportional to the size of the miniature ecosystem you create.

Reef fish and invertebrates do not have developed adaptations sufficient to cope with rapid changes in environmental conditions. This sharply distinguishes them from freshwater fish, which come from waters that are subject to serious seasonal changes. Maintaining stability in a marine aquarium requires suitable equipment. You must constantly perform various actions necessary to maintain the system. According to their indications, you should regularly measure the water parameters with tests and change the aquarium’s conditions.

The most essential need of any creature is the need for food. It is essential to feed fish in the aquarium with food that is as close as possible to the food they eat in nature. These feeds can currently be purchased in flakes, tablets, or frozen in various pet stores. Besides, vitamins on sale can be added to the menu to compensate for multiple nutrients lost during the freezing process. Try to make the fish menu as diverse as possible.

Always keep several types of food on hand. Before purchasing fish, study their main food preferences so that you can provide them with the necessary food. Do not overfeed the fish, as this will cause waste to accumulate on the bottom. Give out exactly the amount of food that sea fish can eat in the first 2-5 minutes. Try to remove excess food immediately after feeding the fish to keep the aquarium clean. Remember how much food you gave earlier, and try to provide the same amount at the next feeding.

Try to reproduce as much as possible the conditions in which your marine animals lived while in the ocean. Find out the ecology of any species in detail before purchasing an animal. Although most fish offered for sale in aquarium stores require almost the same water parameters (remember what was said above about the narrow range of variability in the reef environment), they can vary greatly in size and temperament. Some are quite resilient, while others are extremely capricious. Successful tank maintenance often depends on understanding these differences between species. Scientific knowledge of any species’ ecology is always the best guide to meet its needs in captivity. 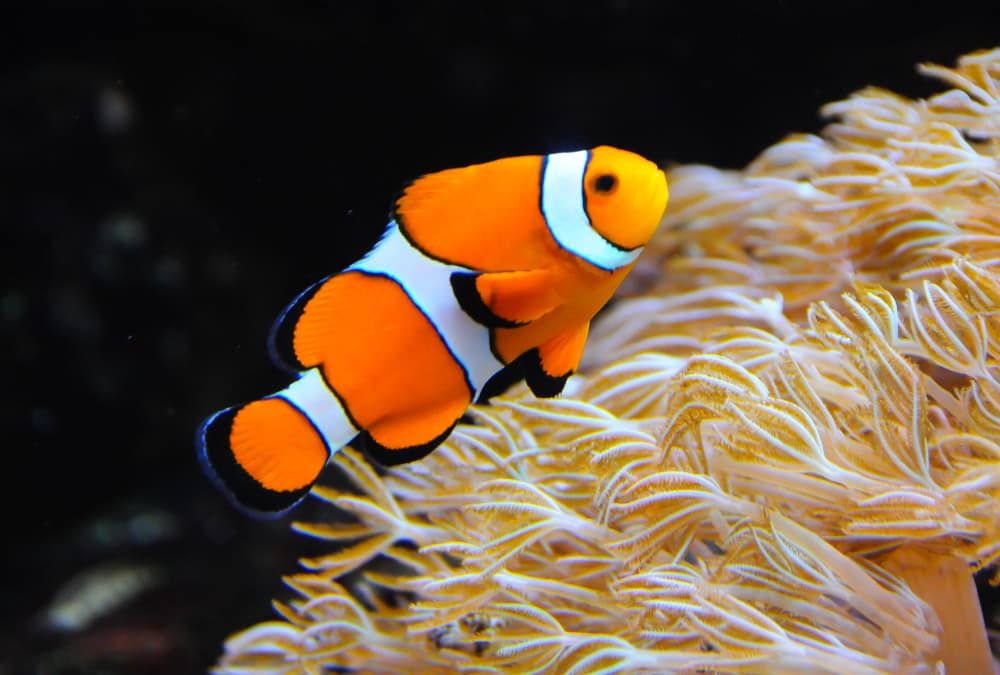 Image by @hydrobiolog from Pixabay

🐠 Is it hard to maintain a saltwater fish tank?

In the past, saltwater tanks were considered difficult to maintain. But now, the marine aquarium has become as accessible a hobby as the freshwater aquarium.

🐟 How often do you need to clean a saltwater fish tank?

Most experienced aquarists agree that you need to clean the aquarium weekly. During this period, the aquarium usually has time to get dirty, but not very critical, so this process will not take much time.

🐡 Is it expensive to maintain a saltwater aquarium?

Prices for marine fish, invertebrates, and plants are, on average, much higher than for freshwater fish. Accordingly, the settlement of a marine aquarium and the inevitable mistakes associated with acquiring the necessary experience are more expensive.

🐠 How often do you have to change the water in a saltwater aquarium?

It is usually recommended to change 10% of the total water volume in the aquarium once a week. Others offer to replace the water every two weeks at the rate of up to 25% per month. Replacing more water is undesirable, as it destabilizes the existing system and causes stress to the aquarium’s inhabitants.