After the release of the well-known Finding Nemo movie, the main character of a clownfish, interest in this marine creature has grown exponentially. Many people wanted to have such a bright and exciting pet fish, despite specific difficulties in maintaining a saltwater aquarium compared to a freshwater one. The clownfish usually becomes one of the first aquarium inhabitants of beginning marine aquarists. Let’s take a closer look at this funny inhabitant of coral reefs. 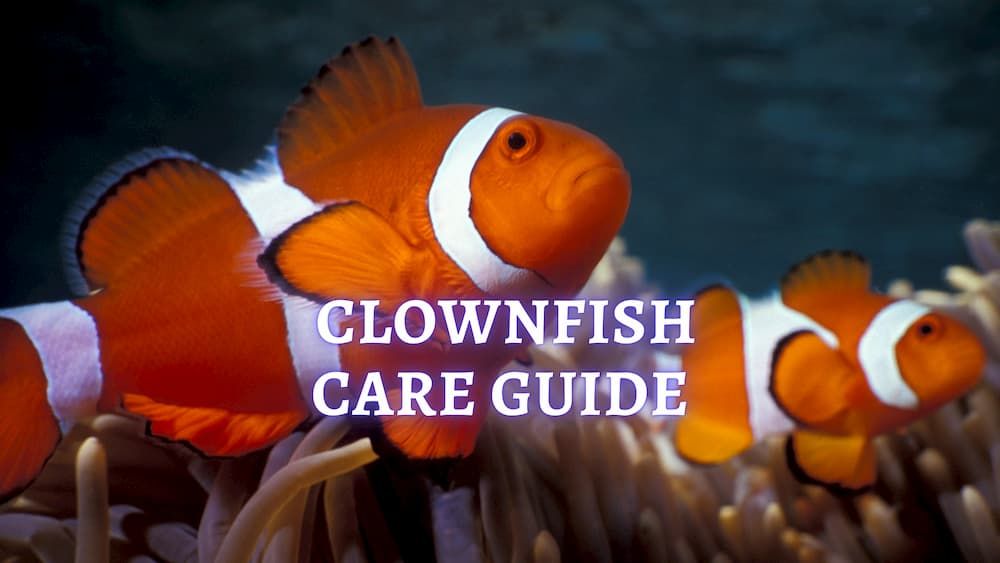 Before we let in some daylight on the basic clownfish care guide, let’s take a glance at its main characteristics. [1] [2]

Clownfish, or Amphiprion, are a genus of marine fish from the family Pomacentridae. Like most saltwater fish, clownfish have a bright, memorable appearance. These fish have a rich orange or red color and characteristic white stripes on the body.

Amphiprion’s exciting feature is their symbiosis (mutually beneficial cohabitation of two organisms) with various types of anemones. These coelenterates have stinging cell tentacles that can cause very severe burns or even kill small animals. However, clownfish use the tentacles of sea anemone as a natural refuge. You may ask – why does the venom of anemones not work on these saltwater fish?

And the answer is pretty simple. In the process of evolution, Amphiprion have adapted to secrete special protective mucus, which makes the fish insensitive to the venom of anemones. Before settling in their new “home,” clownfish carefully allow being stung. In response to this irritation, the fish’s body produces the necessary mucus.

Thus, Amphiprion are reliably protected from attacks by other species. At the first sign of danger, these saltwater fish hide among the tentacles of anemones, and it will be a hard time for anyone who tries to follow them. For this reason, clownfish rarely swim far from their “home.”

This fish provide significant benefit to coelenterates too, clearing their tentacles of food debris and ventilating the water between them, as well as luring other fish with their bright color.[3]

Amphiprion Ocellaris are highly territorial. If there are not enough anemones in the surroundings, there will be a bloody struggle between the fish for “a place in the sun.” Researchers believe that the bright color of fish appeared precisely as a means of warning their own relatives that the place is occupied.

The next feature of the clownfish is that all fry are born as males. Only under suitable conditions, for example, when the main female in the school dies, one of the males becomes a female. In nature, these saltwater fish live in schools, headed by a pair of the largest individuals. The other members of the group stop growing and are always smaller than the main couple.

Amphiprion Ocellaris are one of the few marine fish whose life cycle can take place entirely in captivity.

They are also very “talkative.” In “Overview on the Diversity of Sounds Produced by Clownfishes (Pomacentridae): Importance of Acoustic Signals in Their Peculiar Way of Life”, researchers Orphal Colleye and Eric Parmentier say that Amphiprions can click, grumble, and make many more different sounds.[4]

There are about 30 species, but Amphiprion Ocellaris and Percula Clownfish are the most famous tank-raised species. 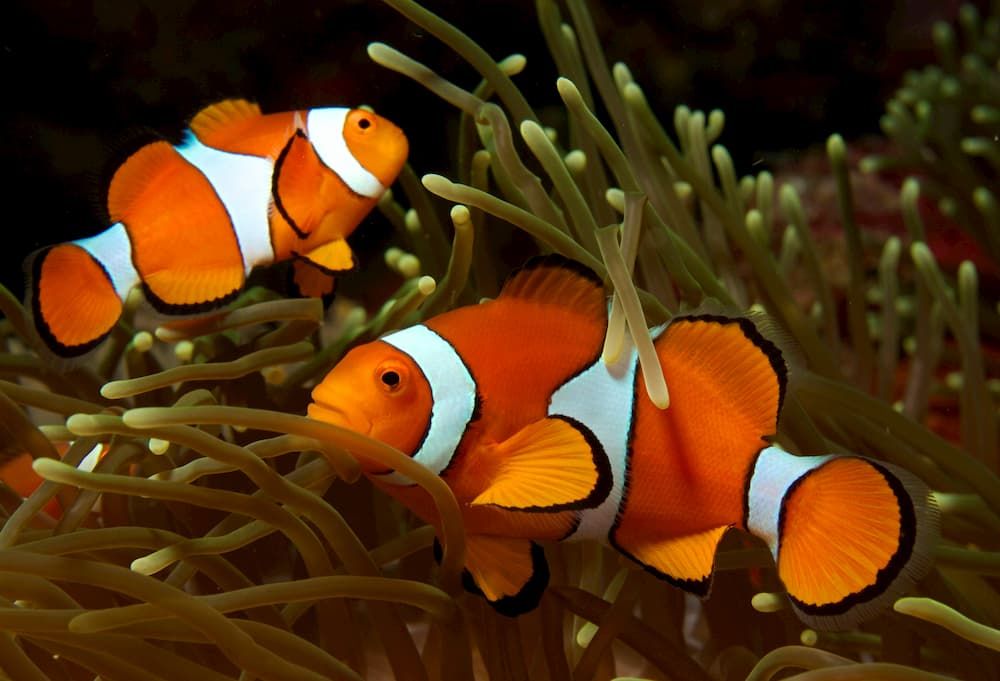 Besides these two, other popular types are:

The main body color ranges from bright orange to red and yellow. The body is crossed by transverse wide white stripes, often with a black edging, which is also present on all fins. The iris is bright orange.

The average life span in nature is about 10 years. In home aquariums, it is almost 2 times longer.

There are about 30 species of Amphiprion. The range of the clownfish is quite wide. It is found in the Pacific and Indian Oceans’ waters, off the east coast of Africa, off the coast of Japan, in Australia’s coral reefs.

Clownfish species usually live in dense thickets of anemones, which provide them with food and protection. But cohabitation with these invertebrates is not a prerequisite for the existence. If there are no suitable coelenterates, then the fish settle among the underwater rocks and coral reefs’ grottoes.

Theese fishes are not good at swimming due to the rounded shape of the caudal fin. Also, they prefer to move slowly. They always need food and hiding places.

They are peaceful buddies, and in the fish tank, prefer to swim at higher levels. This fish looks for a place with a low current level in the aquarium.

Young Clownfish prefer to stay at the tank bottom until they come of age. They consider lower levels of an aquarium to be a more secure place.

All clownfish are known to be sequential hermaphrodites. They are born as males, and as they grow up, they can change sex. The largest fish in the clownfish community is a female, and she is the only female capable of procreating offspring. Thus, if a couple of breeds, one of them is a dominant female. If the female in the fish school dies, the young male will morph into a female and become a new female to reproduce.[3]

Before deciding to “find Nemo” in your home, it is essential to know that you will need to set up a saltwater aquarium. Marine fish are much more sensitive to water quality, and even small changes in its parameters can be detrimental to most aquarium inhabitants. 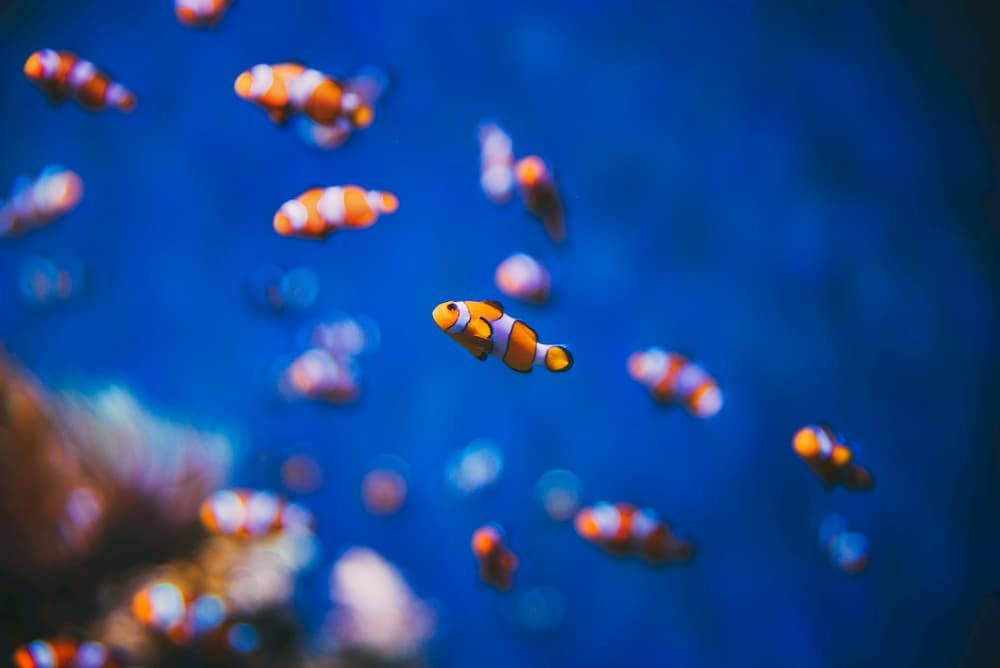 For clownfish, you will need at least a 50-gallon saltwater aquarium. One fish can also live comfortably in a 20-gallon tank, but if you want to house several pairs, you will need a larger aquarium, and in case you are planning to set up a community aquarium with sea anemones, you will require a much larger tank.

You should put sand on the bottom, add “live” stones – special pieces of natural coral reefs with live microorganisms and algae. It is advisable to place various types of anemones in the aquarium in advance before housing fish.

The aquarium should have standard equipment: filter, skimmer, flow pump. If anemones live in it, you will need intense lights. However, fish-only aquariums do not require strong lighting.

Changes and monitoring of the state of water parameters should be carried out at least once a week. Change no more than 10% of the water at a time.

In the natural habitat, wild clownfish live among many other reef fish. They are relatively peaceful and adaptable, so they can live in both small aquariums and large communities.

Often, aquarists pair ocellaris clownfish with anemones, but there is no guarantee that it will be successful. This fish can survive in home aquariums without this symbiotic relationship. However, if you achieve it, it can be a wonderful view to see.

Some suitable anemones for ocellaris clownfish are the following:

Small fish such as butterflyfish, damselfish, and dartfish get along well with clownfish to become perfect tank mates. Blennies and gobies swim at the tank bottom, so they are welcome too.

Also, this fish get along well with the following popular marine creatures:

Clownfish amphiprion are poor swimmers. So if you add larger fish such as angelfish or tangas to your marine aquarium, keep an eye on them to make sure these tank mates do not generate stress for your smaller buddies.

Do not keep aggressive species like groupers, eels, and lionfish with ocellaris clownfish because they will chase and hunt them. Clownfish can become aggressive when fighting for anemones. At the same time, only representatives of their own species suffer persecution.

Do not overfeed this fish. It could be dangerous for them. Feed your Clownfish two or three times a day.

Ocellaris clownfish are relatively easy to breed in captivity. You will need to set the temperature at 83° F for them to spawn. The wooing lasts 5 days, and in this period, you can see the couple in various poses.

The female clownfish lays her eggs on a flat surface. The breeding pair will defend their eggs from other home aquarium inhabitants. Clownfish eggs hatch in 8-11 days (it depends on water temperature). After hatching, you will need to place the fry to a separate fish tank. All fry are born males and turn into a female only under certain circumstances. Feed babies on rotifers, and then, when they get a little larger, on young brine shrimp.[5]

READ MORE: How to Set Up a Small Saltwater Tank 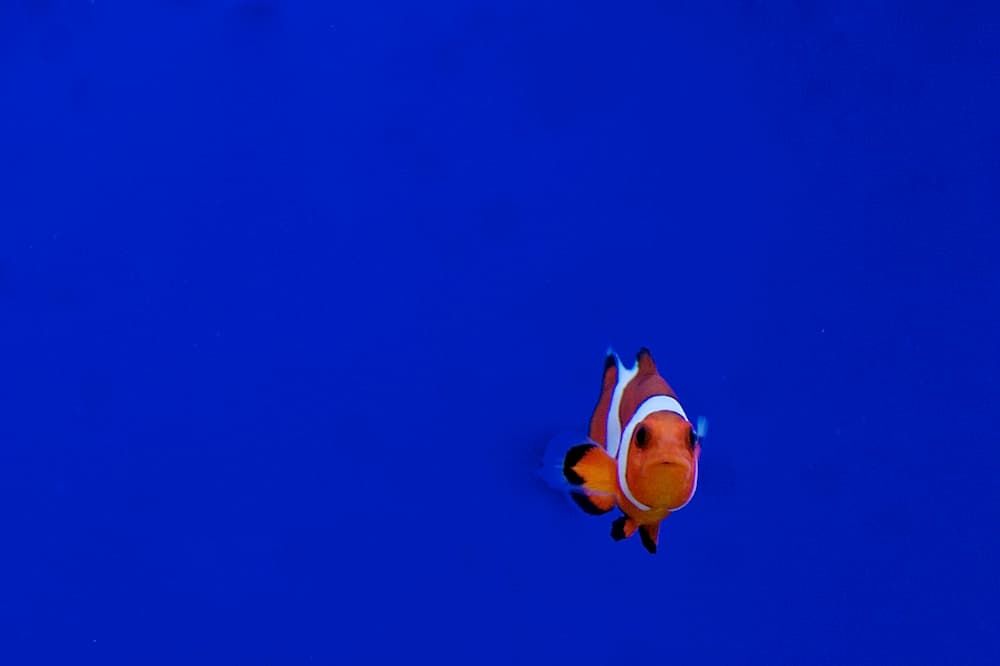 Photo by Nicolas Thomas on Unsplash

Is it easy to care for clownfish?

Clownfish are perfect fish for beginning fish hobbyists, as they are easy to care for, hard nuts to crack, and don’t require a huge tank. Compared to other tank raised marine fish, they have a simple diet.

Should clownfish be kept in pairs?

Usually, clownfish form a pair consisting of a large female and a smaller male with whom she stays till her or his dying day. You can keep clownfish in pairs in your fish tank, but be ready for some squabbling. In a large home aquarium, it is possible to keep them successfully as a group.

How often should I feed clownfish?

Grown-up clownfish should be fed twice per day every 9-10 hours. Young clownfish should eat more often, about three to four times per day. You should provide this fish with the quantity they can eat within three minutes.

Clownfish tanks are relatively easy to set up and maintain. Keep your finned buddies fed and the tank water clean. Make sure their tank mates are not causing stress, and these underwater creatures will become your all-time favorites.